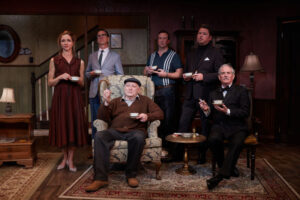 If you don’t feel somewhat disturbed and unnerved after seeing a Harold Pinter play, you probably weren’t paying close attention.

The Nobel Prize-winner (1930-2008), one of the most influential British playwrights of the modern age, reportedly wrote the play in just six weeks, in 1964.

As in many of his other so-called “comedies of menace,” Pinter’s characters have, at best, slippery morality, if not outright amorality.

And while power-plays and one-upmanship among men feature in many of his works, here, in an aging London home inhabited solely by males (a father, his two sons and his brother), it is a woman, brought into this testosterone-fueled hothouse, who winds up wielding all the power and calling all the shots in the end.

As always in a Pinter play, the choices made and how the situations evolve (or devolve) remain unpredictable, uncomfortable, ambiguous and unresolved.

But they’re considerably less outrageous and more “understandable” now than they would have been at the time of the premieres in London (1965) and New York (1967).

Ironically, the title refers less to the oldest brother, Teddy (a controlled, smug, inert Bruce Turk), a pedantic Ph.D. Philosophy Professor now living in the U.S., than it does to his English wife of six years, the mother of his three sons.

It’s she who’s coming home, having grown up in this North London neighborhood. She’s also coming into her own identity, needs and desires.

The family she’s meeting for the first time is quite a collection:  crass, blue-collar and highly competitive, sexually and otherwise.

The patriarch is Max (commanding Frank Corrado, who has spent a good part of his long career in/with Pinter plays), a coarse butcher and underminer of all his relatives.

His brother Sam (dapper James Newcomb), “the best private chauffeur in the company,” collapses from his second-act family revelation (which is ignored). Everyone is more or less delusional and self-aggrandizing here.

The other Alpha male, besides Max, is son Lenny (a deliciously sneering, leering Richard Baird), a pimp who only refers obliquely to his “profession.” The youngest son, hulking Joey (sweetly clueless Justin Gordon), is “in demolition” by day and an aspiring boxer by night.

And then there’s Ruth (still, suggestive Melanie Lora), who is slyly seductive to every one of them, except her husband.

Cynicism about the sanctity of marriage complements the wry, dry, often nasty wit.

The second act opens with the menfolk in a cigar-smoking ritual (sometimes a cigar is not, etc…). Symbolically, Teddy’s stogey goes out prematurely.

With this stellar cast — pitch-perfect individually and superb together — under the meticulous direction of David Ellenstein, this production is both precise and provocative.

You’re unlikely to forget it soon.