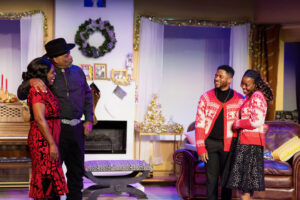 An old truism: There’s universal in the particular.

So, although acclaimed local playwright/arts advocate Dea Hurston’s first musical, “1222 Oceanfront: A Black Family Christmas,” is about a black family named Black, there are elements of this holiday gathering that anyone with a family can relate to.

We see two generations of sibling rivalry, pre-holiday-gathering anxiety, relationship drama, secrets withheld and revealed, keeping and breaking traditions, adapting to change and moving on, even a grown son who doesn’t want to let his mother go — into the arms of another man.

Personally, I’ve seen — and lived — them all. Which is what makes this new seasonal show such a treat. It has humor and sexual innuendo, universal elements, and some that are uniquely part of black American culture.

Like, for example, the hostile response of a white neighborhood (Carlsbad) when the first black family moves in; and even before they get there, the heinous acts of racist lenders who try their best to discourage the sale altogether,  doubling the necessary down-payment a week before closing. Even decades after living there, the family has persistent concerns about black men walking outside at night in this inhospitable white neighborhood and generally harsh racial climate.

There are traditions that are unique to this particular family:  Italian food on Christmas Eve, because on the first Christmas in the family manse (now worth millions), the couple was too financially strapped to serve anything but spaghetti. They only got to move in because the extended family chipped in to cover the extra costs.

As a result of the family’s largesse, Dorothy Black, the matriarch, has pledged to host them all every Christmas, for the duration of the 30-year mortgage. This is the 30th year. And she’s done.

Though they rear their ugly heads, as they must, the heavy issues are sidelined in a mostly upbeat, joyful show that celebrates familial bonds, love and understanding. In spite of the squabbles and revelations, everyone winds up happy at the end.

And on the way there, they often sing their feelings [original music by leading lady Milena (Sellers Phillips], as well as well-known Christmas standards (“What Child is This?”, “Go Tell It On the mountain,” “Silent Night,” and more) in beautiful new arrangements (music adaptation and direction by John-Mark McGaha).

The show was “created and devised” by Frankie Alicea-Ford, Kevin “Blax” Burroughs, Phillips and Hurston, and is directed with a light, deft touch by the estimable Delicia Turner Sonnenberg.

On this 30th Christmas Eve in the family home, Dorothy Black (Phillips) is hosting her sister, Lizzie (Portia Gregory), with whom she has a contentious but loving relationship. Dorothy’s husband, James, Sr., (Victor Morris) dead for 20 years, makes an appearance in flashback (Morris also plays Dorothy’s paramour, the black cowboy, Victor).

James Jr. (Kory LaQuess Pullam) is a perennial naysayer on every subject except his beautiful, talented wife, Aadya (Deja Fields), a former foster child who has become a wildly successful social media influencer.

Javier (Frankie Alicea-Ford) is Dorothy’s adopted son, who was orphaned at an early age. Now, he’s frustratedly awaiting the appearance of his boyfriend, Brian (Durwood Murray, whose slapstick pratfalls seem to belong to a different play).

Overall, the cast is outstanding. Their singing voices and harmonies are superb, and thanks to Hurston’s writing, each actor gets to carve out a credible, three-dimensional character. It’s fun to watch them navigate the changes they’re all undergoing, and how they come to support each other in the effort.

This is a perfect way to kick off New Village Arts’ 20th anniversary season, with a particular story and a universal theme: Family is family and love is love.

This show, along with Herbert Sigüenza’s new “Cuban Christmas Tale,” expands the cultural diversity of San Diego holiday fare, and offers up deliciously new (as well as comfortably familiar) traditions. May they continue for at least 30 years.