2021 IN REVIEW: Best San Diego Theater of the Year 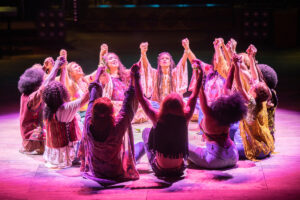 Just when we were getting back to going out to the theater… things aren’t looking so good again for indoor gatherings. Sigh. Theater cancellations have hit New York hard, and started to trickle in, in San Diego, at the end of the year.

2021 was sort of the inverse of 2020, which started out normal (whatever that will ever mean again), and then March 2020 changed the world. By 2021, theater was a watch-at-home activity, until doors started opening and live theater was reinstated.

And then, just as we were getting used to the Delta variant, and masks and showing vaxx and booster proof…Omicron hit with a vengeance, and doors started closing again.

But along the rocky, roller coaster way, there were streaming productions to see and shows to watch.

What was most impressive was the mind-boggling ingenuity and creativity of theatermakers. As soon as we were all forced to be housebound, they started figuring out ways to entertain us.

And over the past two years, those entertainments evolved in innovative ways: from at-home cabarets to Zoom readings to videoed performances to full-on films. Plus, there was theater delivered directly to our doors, with accompanying props or letters, phonecalls and other interactive opportunities.

Admittedly, most of us started to suffer from Zoom burnout, especially if work was also experienced that way.

But some Zoom theater content continued to be produced in inventive and convincing ways. (It was great, for instance, when folks figured out how to ‘cross the boundary lines’ of those onscreen Zoom boxes and really make it look like the performers were in physical proximity).

Another good thing: no local theater companies went under in the past two years (so far, fingers crossed). And one brand-new theater company, Teatro San Diego, emerged, which was pretty gutsy in the middle of a pandemic.

Something else that affected what we saw: After the Black Lives Matters movement really got rolling, 300+ nationwide BIPOC theatermakers signed a letter, “We See You White American Theatre.” And ever since, there have been noticeably more diverse plays, casts, directors and behind-the-scenes creative teams.

An especially fun experience for me: the many filmed musicals we got to see, in addition to “Schmigadoon,” Apple TV’s all-star, made-for-TV series that hilariously spoofed classic musicals.

Two musicals that originated in San Diego were filmed onstage with their original casts (as was “Hamilton,” the first of the exciting bunch to do so): “Come From Away” and “Diana, the Musical,” both of which started at the La Jolla Playhouse.

Amazingly, amid all the insanity, I managed to see almost as much theater in 2021 as in a ‘regular’ year: 190 theater productions, on and offline (very few of the latter), from San Diego and all over the U.S. and Europe. That was one bonus: by putting their offerings online, theaters could attract a much broader audience, and get their name and their work out there nationally. And audiences could feast on the widely disparate offerings.

When it came to making up my Best of the Year list, I confined my choices solely to San Diego productions — live, filmed or however they were presented. So, herewith is my list of

BEST SAN DIEGO SHOWS OF 2021 (from theater companies large and small, and in no particular order)

“Hair” — The Old Globe. The first of many revivals I’ve seen of the 1967 “Tribal Love-Rock Musical” that managed to accurately capture the wild, free-wheeling energy and anxiety of the ‘60s. Excellent cast, wonderfully directed by James Vásquez, resident artist at the Globe.

“The Garden” — La Jolla Playhouse. Another magical, lyrical piece by Charlayne Woodard (her fourth at the Playhouse), this one a mother-daughter two-hander (Woodard and Stephanie Berry). A searing world premiered commissioned by the Playhouse, deftly co-directed by Patricia McGregor and Delicia Turner Sonnenberg.

“The Mountaintop” — The Roustabouts Theatre Company. A filmed production of Katori Hall’s 2009 fantasy that aims to show the man behind the myth: Dr. Martin Luther King, Jr., in his Memphis hotel room on the night before his assassination. Updated to include photos of the racial hotspots and issues of today, with two outstanding performances (Caiel Noble and Ashley Graham). Produced by The Roustabouts as a mentoring experience for two young San Diego theater companies, including The American History Theatre, whose artistic director, Kandace Crystal (a very busy woman this past year), skillfully directed.

“Harlem Duet” – Coronado Playhouse. A filmed, streaming production of a gut-wrenching drama (by black Canadian playwright Djanet Sears) that has been called a prequel to “Othello.” It featured an inspired cast, muscularly directed by Kandace Crystal. Set in three timeframes, from 1860 to 1997, the play traced African American history (personal and social) and the agonized emotional path of a jilted woman.

“Hype-Man” — a streaming production of the American Repertory Theatre and Company One Theatre, co-presented by San Diego Repertory Theatre. A cool, hip, psychedelic music-play about the creation of music, police brutality, fame and friendship, privilege and cultural appropriation, and whose responsibility it is to speak out against social injustice. Intense and unforgettable.

‘A Thousand Ways — from 600 Highwaymen via the La Jolla Playhouse, as part of their ongoing WOW (Without Walls) Festival, which went online this year. Personal, intimate, immersive and extraordinary, this interactive Part One of the series (the only part I participated in, since the second was in-person, before I was ready for that), entailed a phonecall from another theatergoer, a stranger. We never learned each other’s names, but we had a warm, revealing and very satisfying guided, directed ‘conversation.’ Brief, but moving and profound.

In looking back at 2021, there were some exceptional individual performances (in addition to the ones mentioned above) and some remarkable collaborative work I’d like to.

Brooke Henderson, “Once on This Island,” Moonlight Stage Productions

“I and You” streaming from Moxie Theatre

So, even in the midst of disaster and distress, San Diegans managed to make exciting and memorable theater.

Now that the pandemic situation is agonizing and iffy once again (and even if it weren’t), here are a few trends that I hope will endure in theater in 2022 and beyond.

There’s some exciting work coming down the pike in 2022. I hope we all get to see it, and react to it, as a community, together.

Here’s to a salubrious New Year!