“THE MADWOMAN IN THE VOLVO” at South Coast Repertory 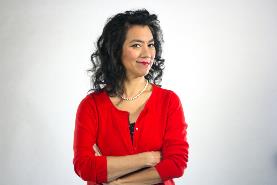 It’s all about hormones. Well, more or less. Sandra Tsing Loh, writer and popular NPR personality, wants to tell you about her menopausal experience. She has been, as the title of her book and its world premiere stage adaptation put it, “The Madwoman in the Volvo.”

We follow her from age 48 to 53, detouring for a few flashbacks to her fraught early life. With the help of two very humorous and versatile fellow actors, she describes her midlife crisis, along with her experiences of L.A. and its carb, kale and gluten obsessions; her well-meaning but sometimes misguided friends; her desiccated marriage, couples counseling, extra-marital affair and some wacky moments at Burning Man.

Most of all, we learn about her probably inherited menopausal depression. This is not the universal aspect of her story, but it’s the crux of it. Any audience member could’ve told her to get on anti-depressants a third of the way through her 90-minute performance.

Although you might not arrive at any earth-shattering revelations, or plumb any depths of understanding, menopausal or otherwise, you’ll have a pleasant evening in Loh’s company, and you may even laugh out loud a time or two. The South Coast Rep production, capably directed by Lisa Peterson, is simply but evocatively designed and lit.

Loh is an antic performer and an excellent writer. She keeps you engaged, and makes you feel like you’re in on one of those girls-only hot tub sharing sessions she talks about.

You can probably leave the guys at home; though they might recognize some of the hormonal insanities, these are clearly women’s stories, primarily geared for 40-50 year olds.

We really don’t need to be told what the most salient “take-away” is or should be, but it’s nice to contemplate anyway: “In menopause, a woman’s hormone levels return to where she was as a pre-teen girl.”

In other words, if you’re a man with a menopausal wife and a teenage daughter, you might think about an extended vacation.