“THE BRIDGES OF MADISON COUNTY” at the Ahmanson Theatre 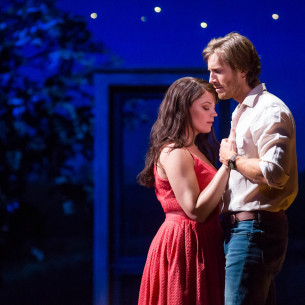 It may have sold 50 million copies worldwide, but Robert James Waller’s “The Bridges of Madison County” was a featherweight novel of, as one critic put it, “sentimental slush.”

It’s the sappy story of an Italian war bride, stuck in the vast cornfields of 1960s Iowa. One day, a photographer from National Geographic stops by to ask directions to one of the local covered bridges, and the trite female fantasy of the exotic stranger who sweeps her away ensues.

Their passionate four-day tryst (while her husband and children are away at the State Fair) changes each of them for life. Francesca must choose between her heart and her obligations, fervor vs. family.

The novel was published in 1992; the movie came out in 1995, and the musical debuted on Broadway in 2014. None of the incarnations was critically well received.

No matter whether you have Meryl Streep or Kelli O’Hara in the role of Francesca, she’s an insubstantial character and not much happens to her except a sexual awakening and a soulmate connection, after 18 years of a stagnant marriage and thwarted artistic aspirations.

Even with a book by Pulitzer Prize-winning playwright Marsha Norman (“’night, Mother’), who said she was aiming for an ‘Our Town’ sensibility, fleshing out the characters, community and backstories, the result still feels flimsy and mawkish, engineered for communal tear-jerking (there were definitely sniffles in the house at the performance I attended).

What saves the musical (which only ran on Broadway for three months, despite the New York Times’ rapturous review of Ms. O’Hara), is Jason Robert Brown’s beautiful score which, along with his orchestrations, won the show’s two Tony Awards.

Brown (“Parade,” “The Last Five Years”) is a master of relationship songs and musical interior monologues.  He has an artist’s eye and a poet’s ear.  His lyrics are unfailingly smart, savvy and genuine. His music here ranges from whimsical to lush, alternately country, bluesy or operatic.  As an extra bonus, Brown himself is conducting the L.A. production at the Ahmanson Theatre.

The show poses a huge vocal challenge for the female lead. Elizabeth Stanley has the chops for Francesca’s musical and emotional swoops. But her voice seems forced (it never managed to obliterate the potent and lasting auditory image of the graceful, gorgeous cast recording of O’Hara). And I never felt a palpable connection between her and hunky Andrew Samonsky — except for the moment he first removed his shirt. She made the moves of passion and anguish, but I never felt it in my gut – or hers. Coupled with her awkward Italian accent, when she soared into operatic soprano mode, it was virtually impossible to discern any of the lyrics. Without sustained, tangible lust, the story flags. Because that’s really what we’re there for; the extra contextual frosting isn’t why we’re there.

Samonsky delivers just fine. He exhibits an effortless voice and sexuality. I believed in his feelings, at least.

The rest of the 16-member cast is solid (at least six performers get solos!). The singing is strong, the movement minimal (Bartlett Sher’s original direction was recreated for this touring production by Tyne Rafaeli), and the production deliberately skeletal (set pieces slide on or drop down to suggest a house, a fair or a bridge). But the lighting (Donald Holder) is jaw-dropping, stunningly marking the time of day and the emotions of the central duo.

Overall, the show, like the outcome of its central relationship, is somewhat less than satisfying.

“The Bridges of Madison County” continues through 1/17/16, at the Ahmanson Theatre, 135 N Grand Ave. in downtown Los Angeles

Performances are Tuesday-Friday at 8pm, Saturday at 2pm and 8pm, Sunday at 1pm and 6:30pm.