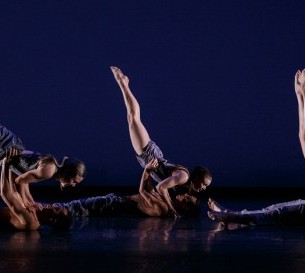 Choreographer John Malashock has always been fascinated by the past. But in his latest evening of dance, in his 28th year of dance-making, he’s also taking a hard look at our over-stimulated Present.

In “Signatures,” he’s balanced two old favorites (Act One) with two world premieres. The old favorites touched me more than the new, but all four pieces are filled with beautiful stage pictures and jaw-dropping moves –  lyrical, athletic and acrobatic.

When I first saw the marvelous pas de deux, “Silver & Gold” in 2008, I was blown away by the diminutive, feather-light Christine Marshall, who spent a good deal of time airborne – or walking on the back, chest or shins of her partner (currently, Nicholas Strasburg). Eight years later, her lithe agility remains nothing short of astonishing, in this heart-rending representation of the approach-avoidance of a couple falling in – and out – of love. The music of Benjamin Britten and Georges Bizet enhances the experience, expressing the joy of togetherness, the humor and intensity of relationship and the manikin-like rigidity of cooled ardor.

In “Dreams & Prayers,” Malashock indulges his love of ceremony and ritual, with a piece created in 2014 with Art of Élan, using a spiritual score by Osvaldo Golijov, Eight dancers engage in spiritual circles and observe  the ritual of death, accompanied by a mournful klezmer clarinet. There is wailing and grieving, spinning and lifting, men and women separated and together, in perfect synchrony. The stirring final image is the culmination of a moving experience.

Act Two brought us to the present, with the latest work.

“Times Unremembered,” which, Malashock said, was inspired by his brother’s frequent quoting of Jung, saying ‘we must revisit the religion of our childhood.’

“The little world of childhood,” Jung said, “with its familiar surroundings, is a model of the greater world.”

In this piece, Malashock said, he was digging into the mysteries of youth, the sense of discovery, the age of wonder, inspired by the “Unremembered” song cycle of Sarah Kirkland Snider, whose music the New York Times called “rapturous.”

The ethereal music included beautiful female vocals, and the seesaw activities of childhood, as well as the ostracizing of a young girl. After her apparent death and the other kids’ apparent loss of interest, the music changes abruptly, and the dance becomes more angular, more tribal, more frightening (there are images that reminded me of “Lord of the Flies,” and the violent, anarchic potential of children). There are lyrics about apologies, and a final image of intertwined bodies/friends. But the faces were blank throughout. There was no sense of joy. And without the choreographer’s introduction, the intention of the piece would have been too opaque to discern.

In “Incoming,” Malashock said he was “digging into the assaultive nature of information and news that is constantly coming at us, and how we try to protect ourselves to be not so at its mercy.”

The music, by Ariel Blumenthal, Jonny Greenwood, David Darling and The Books, began with heavy, aggressive percussion, which ultimately gave way to more lyrical violins. The rapid, agitated sounds were matched by equally frenetic moves. There was a good deal of running, some searching for solace in others – the men separate from the women. In the coupling section, there were phone machine message recordings that contributed little and tended to interrupt the flow. There was an unequivocally unsettled and agitated feel to the dance as well as the music.

This season, Malashock launched The Engagement Ring Series, presenting his dances in the studio (as is “Signatures”). It’s a wonderful effort to bring the audience up close to the dancers, so they can really see the magic (and the intense work) happen.