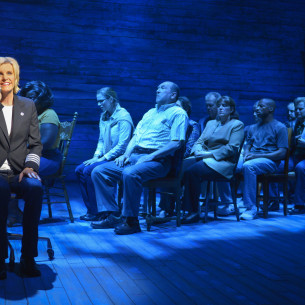 It’s the time of year for lists and hierarchies. Best of this, award-worthy that. So, after having seen more than 200 shows in 2015, I’m jumping on the bandwagon.

It was a stellar year of theater, in a town that’s known for its theater. There was a particularly striking array of new work –  imaginative, provocative and impressive. My top five shows are unequivocal and unforgettable. The rest of the excellent creations could appear in any order. They all deserve glory and acclaim.

Also noteworthy in the comic domain: Samantha Ginn’s side-splitting performance as the title canine in “Sylvia” at New Village Arts (being reprised January 7-24).It was so hard to narrow my favorites to just 10. Here are a few other productions that were memorable and bear mentioning: “Trouble in Mind” at Moxie Theatre, “Big Fish” at Moonlight Stage Productions, “Blueprints to Freedom” at the La Jolla Playhouse, “Dogfight” at Cygnet Theatre and “Violet” at the San Diego Repertory Theatre.

Theatergoers and theatermakers around the country know that San Diego is a hotbed of dramatic invention and ingeuity. You should know it, too. Consider giving your loved ones – or yourself! – a gift of theater this year.

Happy New Year, and I hope you put a little Drama in your life in 2016!