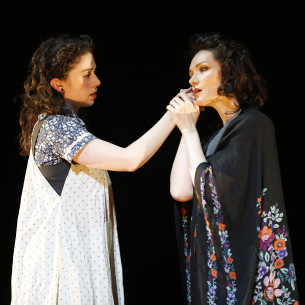 Boy, are we lucky. Not only do we live in a beautiful city, with an incomparable climate… we’re also blessed with an amazing community of arts and culture. And in the theater, one of San Diego’s highest profile artforms, it was an especially bountiful year.

I’d call it The Year of the World Premiere.

We had three major festivals that highlighted new work: the 3rd San Diego Fringe Festival, the annual Wagner New Play Festival at UCSD, and the 2nd Without Walls Festival, a wonderful spectacle hosted by the La Jolla Playhouse.

And there were a ton of debuts at theaters large and small.

Two of the year’s most memorable productions were at the La Jolla Playhouse: the heart-warming new musical, “Come From Away,” set in the aftermath of the 9/11 attacks; and the splendid “Indecent,” about a play that was considered ‘obscene’ in the early 20th century, and how that censorship still resonates today.

The best new work at The Old Globe was “The Twenty-Seventh Man,” and they also brought us the stunning touring production of “The White Snake.” The San Diego Rep’s provocative premieres were “Uncanny Valley” and “Oedipus El Rey.”

Two of our smallest companies were also adventurous. ion theatre wrapped up an entire season of new work by taking one of their premieres, “Sea of Souls,” to New York. InnerMission Productions debuted “Disappearing Act,” on a topic close to home: PTSD and suicide in war veterans.

Assisted suicide featured in one of the most unforgettable dramatic productions of 2015: Intrepid Theatre’s “The Quality of Life,” which gave us one of the year’s best performances, by Jeffrey Jones.

But it wasn’t all serious business on San Diego stages. Two hilarious comedies were memorable: the guffaw-inducing “Unnecessary Farce” at North Coast Repertory Theatre,” and the great American classic, “You Can’t Take It With You,” at Lamb’s Players Theatre.

So, I laughed, I cried, I saw more than 200 shows – and I was once again blown away by the diversity and profundity of San Diego theater. When listing your New Year’s resolutions, make one you intend to keep – seeing more excellent local theater in 2016.