“MEET ME IN ST. LOUIS” at The Welk Resort Theatre 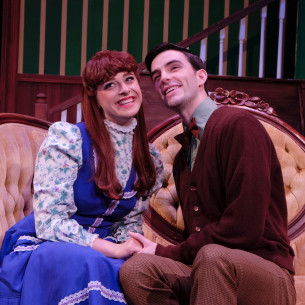 There’s a reason some old warhorses aren’t trotted out that often; their fighting days are over – if they ever were in true fighting form.

Such is the case with “Meet Me in St. Louis,” the 1989 musical based on the 1944 MGM film. Since the movie appeared during wartime, it can be excused somewhat for its feel-good, sappy sentimentality. But in re-framing the show for the stage, book writer Hugh Wheeler and songwriters Hugh Martin and Ralph Blane added backstories and songs that didn’t add up – or add to the original.

Most of the numbers don’t feel organic to the show, and they don’t advance the development of plot or character. The storyline is flimsy, with no demonstrable conflict or drama. A large, get-along-great family is excited about the upcoming 1904 World’s Fair that will put St. Louis on the map. But not long before opening day, Father announces that he got a promotion and they’re all moving to New York City.

Everyone is devastated – especially the two boy-crazy teens who are just dying to be married. Everything turns out right in the end; the gals even get their matrimonial proposals.

What makes the Welk Resort Theatre production worthwhile is two knockout numbers and two fine performances. “The Trolley Song” is always bouncy fun, and “Have Yourself a Merry Little Christmas” is timeless and terrific. Both are excellently sung by L.A.-based Chelsea Emma Franko, who has a charming stage presence. As her sister, Sarah Errington is also memorable.

Under Larry Raben’s direction and Karl Warden’s choreography, the rest of the cast seems to be working hard to please. The sum total doesn’t feel genuine, but it sure is nostalgic.

The robust five-piece band, under musical director Justin Gray, can sound tinny at times. The singing is strong overall. This show just doesn’t have all that much to sing about.