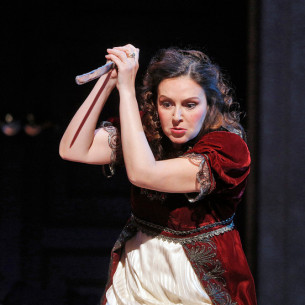 “Tosca” has a highly dramatic pedigree. The source material, an 1887 play by French melodramatist Victorien Sardou, was written as a vehicle for tragedienne Sarah Bernhardt. The result was enormously successful, reportedly performed 3000 times. The Puccini opera (with libretto by Luigi Illica and Giuseppe Giacosa) received mixed reviews from critics at its 1900 premiere in Rome, but it has remained an audience favorite ever since. The passion reaches a feverish pitch: torture, murder, near-rape, suicide. Now that’s drama.

The opera opens with three crashing chords, always used to suggest the sinister Scarpia, Rome’s malevolent chief of police. His malignant figure represents the reactionary forces of Italy in the battle against Napoleon. Scarpia forms one side of a triangle that pits him against Cavaradossi, the painter (and Republican sympathizer) beloved by the beautiful prima donna, Floria Tosca.

At the San Diego Opera’s season opener, all three are played by marvelous singers.

Greek soprano Alexia Voulgaridou, making her company debut, brings gorgeous, effortless tone to the role of Tosca. Her voice is smooth, creamy, crystalline at the top and rich at the bottom. Her acting is impressive, too, though there are a few melodramatic moments, and her final, fatal leap is surprisingly under-played. But her amorousness, her playfulness, her quick-fire jealousy and anger and her third-act anguish are completely credible.

Welsh tenor Gwyn Hughes Jones (also an SDO first-timer) brings a robust presence and stellar tone to the doomed Cavaradossi; a little stiff, perhaps, in the first act, but increasingly emotional through the course of the opera, ending with a heartbreaking “E lucevan le stele.”

Consummate American bass-baritone Greer Grimsley, who has appeared at SDO a number of times (including as Scarpia, in 2009), brings a resonant, sonorous sound and a slick menace to the reptilian hypocrite. Swooping in with his black velvet cape and calculated evil, he incites Tosca’s jealousy (comparing himself to Iago) and relishes his impending sexual conquest, the price of saving the life of her lover. Even after death at her hands, he manages to renege and double-cross.

All the secondary roles are excellently sung as well. The Cardinal-red-clad children’s chorus is delightful, and the adult chorus adds power to the Act One “Te deum.”

Director Lesley Koenig does a masterful job of staging; she creates lovely stage pictures, and has devised diverse, imaginative (but not intrusive) stage business to fill the massive space. The set (by Andrew Horn, originally designed for the New York City Opera, as were the splendid costumes) is magnificent and colossal, stunningly lit by Gary Marder.

This new production for San Diego may be lengthy, but it’s fleet-footed and extremely well-paced. It’s a stunner, both visually and acoustically. And beyond the superb lyricism and glorious arias, there’s plenty of drama to keep audiences riveted.