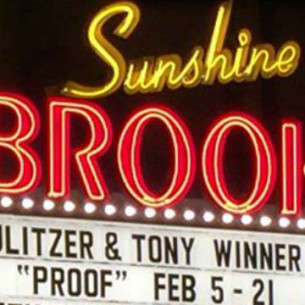 The title has multiple meanings in David Auburn’s Pulitzer Prize and Tony Award-winning 2001 drama, “Proof.” In one sense, it refers to a dense mathematical proof that has been discovered after the death of a brilliant mathematician. It also refers to the evidence required to determine who actually created the groundbreaking proof. And then there’s the issue of love, and the need for proof of its authenticity.

Surrounding the mystery element of the intriguing plot, there are other conflicts and issues. Has the mathematician’s daughter inherited his madness as well as his genius? What’s the source of her fraught relationship with her sister? And what are the true motives and intentions of young Hal, a former doctoral student of the late mathematician?

The Oceanside Theatre Company (now fully professional, paying all its artists) is presenting an extremely well acted production. Kate Schott is charming, sassy and adorable as Catherine, the budding mathematician. James Winkler is solid (even when incorporeal) and credible as her dad. Dhyana Dahl is very nicely dressed (costumes by Roz Lehman) as the estranged, high-end, New York-based sister who returns to Chicago for her father’s funeral. And Dylan Christopher is perfectly awkward, hesitant and geeky as Hal, the 28 year-old mathematician who realizes that, math being a young man’s game, he’s already past his prime.

But in this production, the edge is sheared off the play. This Claire is too compassionate, not half as bitchy or uppity or condescending as she should be. Catherine repeatedly says she hates her sister; we need to see more evidence of why (so maybe we can hate her a bit, too). Most crucial, though, we need to harbor doubts about Hal and his plans for the newly discovered proof. That’s what really makes the play interesting, and leaves us with a deliciously unnerving uncertainty. OTC founding artistic director Christopher Williams did an excellent job of casting, as well as designing the set and sound, and seating the audience on the Brooks Theatre’s stage, bordering the action on three sides, to create an intense and intimate environment. He just left the enigma out of the “Proof.”