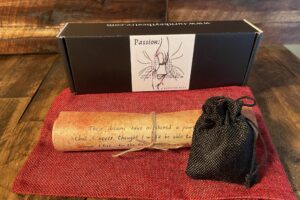 Starting a theater company takes a mountain of passion, grit and determination. Opening during a pandemic requires an extra dollop of chutzpah and cojones (even if it’s a woman-led business endeavor).

Given the aim and intention of Turnkey Theatre, it all makes perfect sense.  Their name means bespoke, pre-integrated, ready for immediate use. Their mission is to provide a complete theater experience, what they’re calling Blackbox productions.

In the theater world, a “black box” refers to an intimate, unadorned space, frequently used for experimental work. In Turnkey’s Blackbox productions, accouterments for their warmly personal, immersive audio theater experiences are shipped to their audience in small, specially curated black boxes. As you listen, you are told how and when to use the items provided (e.g., candle, letters, spices and seeds).

In other words, the company is sending theater to your home.

They launched their first venture in April 2021. “Homecoming: A Meditation on the Natural World,” written by Turnkey founder/owner/artistic director Katie Turner and J’Arrian Wade, a theater student at San Diego State University (SDSU), is a calming, guided meditation, hosted by Mother Earth (“the one who created you, nurtures you, and to whom you’ll return”). She invites her “most precious creatures” to join her — the spirits of Air, Fire, Water and Earth— to help her put us back in touch with “the elements that live inside us,” so we learn more about the world around us, and about ourselves, to find balance again in “these times of separation and loss.”

In May 2021, they premiered “Passion: A Ketuvim Play,” by Eliana Payne, a solo play enacted with a lovely, touching performance by Becca Meyers. Written in the form of letters from the palace to her sister, the piece provides a backstory for Vashti, an ancient Persian queen who is briefly introduced in a section of the Jewish writings (Ketuvim) that are part of the Hebrew Bible. One of the 11 books of Ketuvim is the Book of Esther, which tells of King Ahasuerus and his two wives. Vashti, who refused to parade herself in front of her husband’s drunken chamberlains, was either banished or beheaded, powerful and independent, or vain, evil and disobedient, depending on the interpreter. She made way for Esther to become queen and save her people, the Jewish people, from extermination.

Director/playwright Payne, remembering her childhood experiences with the holiday of Purim (the reading of the Book of Esther and celebration of her saving of the Jews), adopted a feminist perspective. Since there is nothing written about exactly why Vashti chose to flout the king’s order, Payne created a reason, a self-assertiveness and sexual awakening that freed Vashti from the restrictive norms of her society.

In Payne’s view, the beautiful Vashti was asked to appear naked before the king and his princes. Instead, she gathered the women around her for a parallel week-long event, while the king was carousing with the men. During this time, she found her inner strength and explored her sexuality. She was, according to the playwright, a woman ahead of her time, who knew her worth and bravely stood up to her male oppressors.

Unfortunately, as the Book of Esther has it, one of the chamberlains sent word throughout the kingdom, that, to avoid the same happening to other men, “all the women shall give honor to their husbands” … and “every man [should] dominate in his household.” Sadly, millennia later, women are still fighting those same battles.

My own history is also filled with Purims past, when the girls clamored to dress like Queen Esther for the costume competitions. I don’t recall anyone wanting to be like Vashti. When I was 5 or 6, my mother, ever creative in her costuming, made me into the Megillah, the actual scroll of the Book of Esther (embarrassing photo attached). The costume was hard to move or sit in, but it won all the costume prizes.

The black boxes for Turnkey’s unique and provocative theater pieces are still available, and you can listen to the lively, evocative audio presentations of their first two offerings. Next up for the company is a Victorian-inspired choose-your-own-adventure play, coming in October.

“We will continue in this format,” says Turner, a Ph.D. Lecturer in the School of Theatre, Television and Film at SDSU. “Though we might have some live events at some point, they will be available online as well.”

Like their dramatic subjects, Mother Earth and Vashti, the women of Turnkey want to show us a different way to experience what we know (or think we know) … about  our environment, ancient and not-so-ancient history, and ourselves.

The first two audio plays of Turnkey Theatre are available for listening at www.turnkeytheatre.com