“MURDER ON THE ORIENT EXPRESS” at Coronado Playhouse 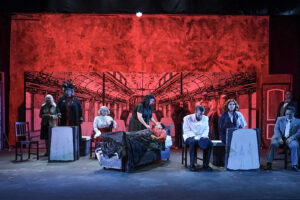 Dame Agatha Christie was the queen of the locked room murder mystery.

Edgar Allan Poe may have written the first one, in 1841 (“The Murders in the Rue Morgue”), but Christie wrote the most famous ones, among which is “Murder on the Orient Express” (1934). At the center is her popular Belgian detective extraordinaire, Hercule Poirot.

Set on the elegant train in 1934, and inspired by the real-life, tragic kidnapping and murder of Charles and Anne Morrow Lindbergh’s 20 month-old baby in 1932, the novel has been adapted into radio plays, board games, TV series and films (1974 and 2017) — but never for theater.

At the request of the Christie estate, playwright Ken Ludwig (Tony Award-winner for “Lend Me a Tenor” and “Crazy for You,” and master of the literary adaptation) wrote the first stage version, which premiered at the McCarter Theatre in Princeton, NJ in 2017.

Now, the Coronado Playhouse is introducing the play to San Diego, under the inventive direction of Tyler Richards Hewes.

He has intriguingly cross-gender cast a number of roles, including a woman (Heather Deerfield) quite effectively portraying the indefatigable, heavily accented, mustachioed Poirot.

In the first moments, we watch the kidnapping of a little girl (a larger-than-life, two-dimensional puppet with movable arms, operated by two ensemble members; voiced, with convincing screams, by the director’s 6 year-old daughter).

After that, it takes a while for us to meet all the first-class passengers on the luxury train, each of whom will become a suspect in the murder of one of them, a middle-of-the-night stabbing that takes place in his locked compartment.

The train, too, is locked, trapped on the tracks in a blizzard on its way from Istanbul to London. Poirot, having been summoned to London by Scotland Yard, is called into on-board service.

The stakes get progressively higher, the relationships among the passengers are revealed to be complex and circuitous, and of course, the murder gets solved, with an extra dose of moral dilemma and unpredictability at the end.

While the pace lags at times, the 11-member cast is engaging and often amusing, with a wild range of accents (Hewes lost his dialect Coach mid-rehearsal, and had to rely on youtube for assistance, with generally impressive results.

He added his own little personal, humorous touch — having the American passenger hail from his home-state of Minnesota, modeling her speech after that of his aunt.

What’s most imaginative about this production is the scenic design (Dennis Floyd, with the assistance of master carpenter Stan Soth and graphic designers Barron Henzel and Duane McGregor). The team has created the revolving panels of periaktoi, an ancient Greek theatrical device that rotates for changing settings.

Each scene, efficiently rotated by a costume-changing ensemble of four (creative costumes by Pam Stompoly-Ericson), provides us with views of the train’s exterior, its chic dining room and the interior of three adjacent sleeping compartments. The stunning, intricate black-and white dining area looks like the hand-drawn pen-and-ink creations of the Old Masters, enhanced by mood-setting lighting (Mashun Tucker).

Another coup for Coronado, and an entertaining challenge for amateur San Diego sleuths. (My husband handily guessed whodunnit).