“BHANGIN’ IT: A BANGIN NEW MUSICAL” at La Jolla Playhousee 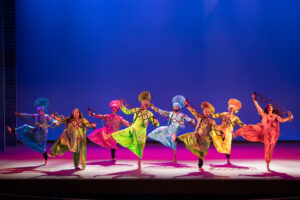 The world premiere at La Jolla Playhouse, “Bhangin’ It: A Bangin’ New Musical,” has a lot of performers, a lot of dancing, a lot of serious themes, a lot of energy and passion — and a lot of work still to be done.

Like Bhangra, the dance its name refers to, “Bhangin’ It” is exuberant and energetic. (The folk-dance form had its origins in the Punjab region of Northern India and Pakistan, and is rooted in harvest celebration).

Although the frothy overall nature of the piece predominates, the musical repeatedly underscores issues of cultural identity, cultural purity and community; assimilation and appropriation; tradition vs. adaptation and innovation; living (and loving) in the past vs. the future (according to the central character’s enigmatic mantra, or ‘Momtra,’ as one song has it).

These weighty matters are, in fact, much more interesting and unique than the feather-light story of competing bhangra dance teams.

The show, with book by Mike Lew and Rehana Lew Mirza; music and lyrics by Sam Wilmott, seems to be intentionally derivative, with sometimes overt references to “Bring It On” (cheerleader competition musical), “Mean Girls,” “The Karate Kid” (quote: “She’s been Karate-Kidding us this whole time!”) and even “A Chorus Line” (there’s a solo dance number that looks and feels very much like “The Music and the Mirror”).

And then there’s the ending, pure sappy, fantasy/fairytale Disney, which is a shame, since there really is a great deal of substance here, in addition to the mashup of cultures and performance and dance styles. The music is also, appropriately, pastiche, since diversity and inclusion comprise a running theme.

It all takes place at the fictional East Lansing University in Michigan, an odd choice, since Lansing, the capital, doesn’t have the biggest South Asian population in the state. Michigan, in fact, with an Asian representation of only 5%, is not even close to logging into the top 10 states with the largest Asian populations.

And yet, the school has a Bhangra team… two, by the end of the first act.

[FYI, California has the country’s largest Asian population, so it’s no surprise that UC San Diego has a Bhangra team (‘Da Real Punjabiz’) and is part of a huge worldwide community of competitive Bhangra dancing, much of it linked to colleges].

Which brings us back to ELU (East Lansing U), and its team, The Tigres (pronounced ‘tigers’ and sporting brilliant orange costumes with black stripes and large headpieces), ready to head to the National competition in Chicago.

One team member, Mary Darshini Clarke (the wonderfully ebullient, charismatic San Diego native Ari Afsar), wants to expand the team’s repertoire by having a solo in the kathak style of classical Indian dance that she learned from her mother (who died when Mary was just 13). Being mixed-race (her mother was Indian, her father, white), she’s trying to figure out who she is and where she belongs. She wants to honor both her Indian heritage and her mother — who puts in several graceful, ghostly appearances.

But Preeti, the team bully (forceful Vinithra Raj), a purist and pure-bred Punjabi, will have none of it, and kicks Mary off the team, even though she’s only a sophomore and Mary is a senior. Everyone, including the affable ‘Can’t we all get along’ captain, Amit (gentle Bilaal Avaz), is intimidated by Preeti.

Mary retreats to her room, bereft, but her spiky roommate, Sunita (funny Jaya Joshi), a political activist/protest artist who carries around her Kama Sutra soft sculpture of a uterus, suggests that Mary “start your own team, where no one tramples on anyone’s self-esteem.”

And so Mary puts out an audition notice (which, amusingly, appears in the show’s program), saying that it’s open to everyone.

They question the whole enterprise (“If This Were a Thing”), their own identities and the expectations of others (“Toledo,” an amusing/incisive number about “doubting your experience,” “checking your cultural cred” and not being forced to be a representative of your cultural background).

Mary leaves, returns, and ultimately wrangles (through somewhat dubious means) a place for her team, now called the Wood Ducks (the school’s mascots), at the Nationals.

The group gets a lot of help from expert dancer Rekha (Alka Nayyar) as coach, who gives them the “Karate Kid’ treatment in the kitchen of her restaurant, the Samosa Hut. When the Tigres show up, the confrontation devolves into a Holi-like free-for-all, with spices and herbs thrown instead of the powdered paint that annually celebrates the bright colors of spring in India. It’s a raucous, stunningly-lit scene. But it comes with serious consequences. The Ducks lose Rekha but gain her cultural insight: “Our language is open, our culture is open.”

And that leads to the surprisingly saccharine denouement, as the two Alpha females apologize and say they love each other, the two teams join forces (three hours before the National competition!).

The finale is a spectacular blend of Bhangra, hip hop, Bollywood, ballet and even a bit of kathak, with its subtle footwork and beautiful hand moves.

Several songs stand out as emblematic of the more weighty cultural matters in the musical.

“Stamp It Out” is about non-tolerance. “Eat Each Other” calls up the image of Ouroboros, the mystical serpent that eats its own tale, underscoring the meaning of wholeness and inclusivity instead of group or individual self-sabotage. “Erase You” concerns the fear of moving away from history and tradition. And “More Than Enough” could be an anthem of intersectionality and embracing your personal/cultural/multi-level identity.

In this co-production with The Huntington, the creative/design/technical work is outstanding: the eye-popping set (Robert Brill), costumes (Linda Cho) and lighting (Amith Chandrashaker); Stafford Arima’s forceful direction; the amazing, kinetic choreography of Rujuta Vaidya and ‘musical staging’ by Lisa Shriver; the projections of David Bengali, the orchestrations of Justin Goldner and Deep Singh. Singh wrote the additional music and appears onstage playing the Dhol, the large, two-sided drum, and providing the all-important percussion section for the four other parts of the orchestra (keyboards; acoustic and electric guitars and mandolin; electric bass; and bansuri/flutes, to create the unique and electrifying soundscape.

He and his wife/collaborator should trust their serious and comical instincts on this show, too, and not let the superficial outweigh the substantial. They have numerous important, topical things to say. With trimming, tightening and a laser focus, this piece could have long and agile legs.