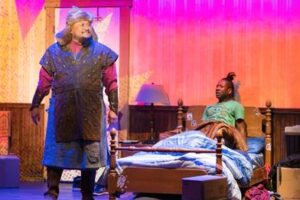 All we know of The Great Khan (Genghis) comes from The Great Con (the teaching of history in school).

So says playwright Michael Gene Sullivan in his rolling world premiere, “The Great Khan,” part of the National New Play Network, making its second stop at the San Diego Repertory Theatre (the other two member theaters for this production are the San Francisco Playhouse and Chicago’s Redtwist Theatre).

The comic drama was first featured locally in the REP’s Black Voices Reading Series in 2021.

Now, fully fleshed-out (but in need of more tightening and trimming), it goes deep into the truths behind the monstrous myth of the Mongol leader, as well as many other issues, including racism, sexism, surviving trauma and growing up while trying to figure out who you are, where you fit in, and how you can make a dent in a past and present overloaded with oppression.

Gangsta Rap features prominently, as do F-bombs, N-words and the charismatic Khan.

But first, we meet Jayden (Jerome Beck), he’s 16 years old, but because he stepped in to protect a Black classmate who was being assaulted by a gang of pugnacious, bullying Black kids, he became an imperiled pariah.

So his mother, postal worker Crystal (Brittney M. Caldwell) moved him to a new (mostly white neighborhood and school. Smart, nerdy, angry and video-game-obsessed, Jayden is more isolated than ever.

He hasn’t got any “homies” (though he really didn’t have them before, either), and no present father (his dad was deported to Africa years ago). But he’s paired with another school “outsider,” Gao Ming, a Chinese girl in his history class: their project’s biographical subject is Genghis Khan.

At first, Ant (short for Antoinette), the girl he saved, who indignantly insists that she didn’t need saving, crawls through. Later, it’s the Great Khan himself.

We learn a lot about the man, born Temujin (1162-1227), who was founder and first Great Khan (Emperor) of the Mongol Empire, which became the largest contiguous empire in history. He gained power not only by the violent killing he’s known for, but by uniting many of the nomadic tribes of Northeast Asia.

When Temujin was young, his father was murdered and his family exiled. Jayden, who longs for the Khan’s ferocity, also feels like a refugee. He, too, was traumatized early, as was his mother.

Mr. Adams, who gave out the assignment, is a do-gooding, man-bunned liberal who tries to be cool, but has not the slightest idea about Black history, and has considerable trouble naming 20 famous Black people who aren’t in sports or entertainment — a challenge defiantly presented to him by Jayden.

Among the many didactic moments from the presentation on Genghis Khan (accompanied by wonderful projections designed by Blake McCarty), we learn that, as The Great Khan (wonderfully amusing Brian Rivera) tells us, not only the winners get to write history — but also the survivors (“those we didn’t get to yet”)..

As the playwright has said, “Nobody has been more defined by those who hated him than Genghis Khan.” And he has The Khan tell us, “My enemy is anyone who stands between my people and their freedom.”

The Khan did murder a ton of folks, but there’s another side to him and his story that most of us haven’t heard. He was honest, loyal and genuinely adored by his followers. Of the many truly atrocious despots mentioned in the play (Alexander, Napoleon, Hitler, etc.), he was the only one greatly mourned when he died. And bonus! — he was the first to popularize pants!

There’s a great deal to chew on and digest here, peppered with humor, which makes it go down easily. The performances are exceptional; under the assured direction of Jess McLeod, each character has believable strengths and vulnerabilities.

The costumes (Faith James) are clever, the ambient and percussive sound (Tosin Olufolabi) is excellent, and the lighting (Rebecca Jeffords) makes a strong contribution.

But the specific takeaway from Temujin’s visit is not made crystal clear. Exactly how should Jayden move forward as a young Black man in America, born with a target on his back?  Does he fight or hide or lead or kill? Or just go back to being the good-student, geeky teen he was?

It’s not spelled out, though Temujin does tell Jayden “I became The Khan. You could become… something more. You better hope you’ve been kind and fair, or the day may come when there’s no place for you to hide under the eternal blue sky.”

By the end, Jayden appears to be moving in a positive direction. He has a loving reconciliation with his Mom, starts unpacking his boxes, and he and Ant do seem to be evolving into a friendship of equality. (No sign of that with Gao, however).

Ant gets in a terrific monologue on what it’s like for a girl to reach puberty and deal with how boys react to your altered body and start to look at you “like you’re food,” while inside, you still feel like the kid you were before.

Sullivan has a slick way with rapid-fire dialogue, a fascinating perspective and a lot to say. He’s definitely someone to look out for and listen to.