“EL BORRACHO” at The Old Globe 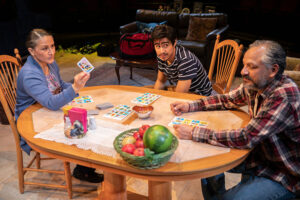 “El Borracho” means ‘the drunkard.’ And the moment you enter The Old Globe’s in-the-round White Theatre, you get the picture.

A cramped apartment features a huge suspended crucifix and is surrounded on all sides by hundreds of empty beer and whiskey bottles (3 or 4 deep), provocatively lit from below (beautifully detailed scenic design by David Israel Reynoso, with expert lighting by Mextly Couzin).

Clearly, this is a home, a family, with a borracho, which is also the name of a card in Loteria, a popular Latin American game (that originated in Italy, then moved to Spain and, in the 1700s, to Mexico) similar to Bingo. Instead of letters, there are colorful images: El Sol, La Luna, El Diablito (The Devil) and #25, El Borracho, a stereotypical, staggering inebriate.

Raul (Jesse J. Perez) was married to Alma (Zilah Mendoza) for 25 years. She divorced him years ago, for his drinking, carousing and infidelities. They “hate each other,” he says.

But now, Raul has lost his pizza delivery job and is also dying. His adult children (two of the three, anyway; one left home and never looked back) have encouraged (forced?) their mother to take him in and take care of him until he passes.

In this family tragedy (billed as a dramedy, though there isn’t a great deal of comic relief), everyone is harboring resentment, disappointment, frustration and anger. Though it all seems to be undergirded by love, real feelings are rarely expressed.

The son, David (Matthew Martínez) just wants his father to be proud of him (not one member of the family came to see the production of his first play). The mother prays for her ex, but only that Jesus will forgive him; she cannot. The father wants to sweep everything under the rug, including his diagnoses (he seems to be succumbing to more than one disease).

Now his mind is going (his flashback/hallucinations are animated and life-affirming) and he loses track of time. But he doesn’t change.

And therein lies the problem with this world premiere. The characters don’t have an arc; they don’t change. And neither they, nor the audience, experience catharsis.

Presumably, the creation of the piece was cathartic for the playwright, Tony Meneses, who based the story on his own family. He’s even made David a (closeted) playwright, who’s terrified of telling his father he’s gay (the Big Reveal, when it comes, is decidedly anti-climactic). If you want to interpret the ex-couple coming together for one moment as a rapprochement, remember that they were both drunk at the time, so it doesn’t really count.

The play, which had a reading at The Globe’s 2019 Powers New Voices Play Festival, needs more dramaturgical assistance. Some scenes are too on-the-nose. Some plot elements are under-explained.

Toward the end, we find that the parents “never even tried” to learn English, and their children always had to serve as translators and intermediaries (a resentment that isn’t explored). So we may then assume that the whole play is actually taking place in Spanish, though we hear only a few snippets of the language here and there.

The characters are potentially interesting, but except for Raul, they’re not fully fleshed out. We need to know more about their frustrations and motivations.

Still, the production is strong. The direction (Edward Torres) is knowing and sensitive, though the 90 minutes pass slowly and due to the writing, repetitively.

The potent performances feel authentic. Sadly, we get just a glimpse of the challenges of bilingual biculturalism over two generations. But it could have been an opportunity for us to gain a lot more insight — into this family, and the many others, especially in this region, like it.