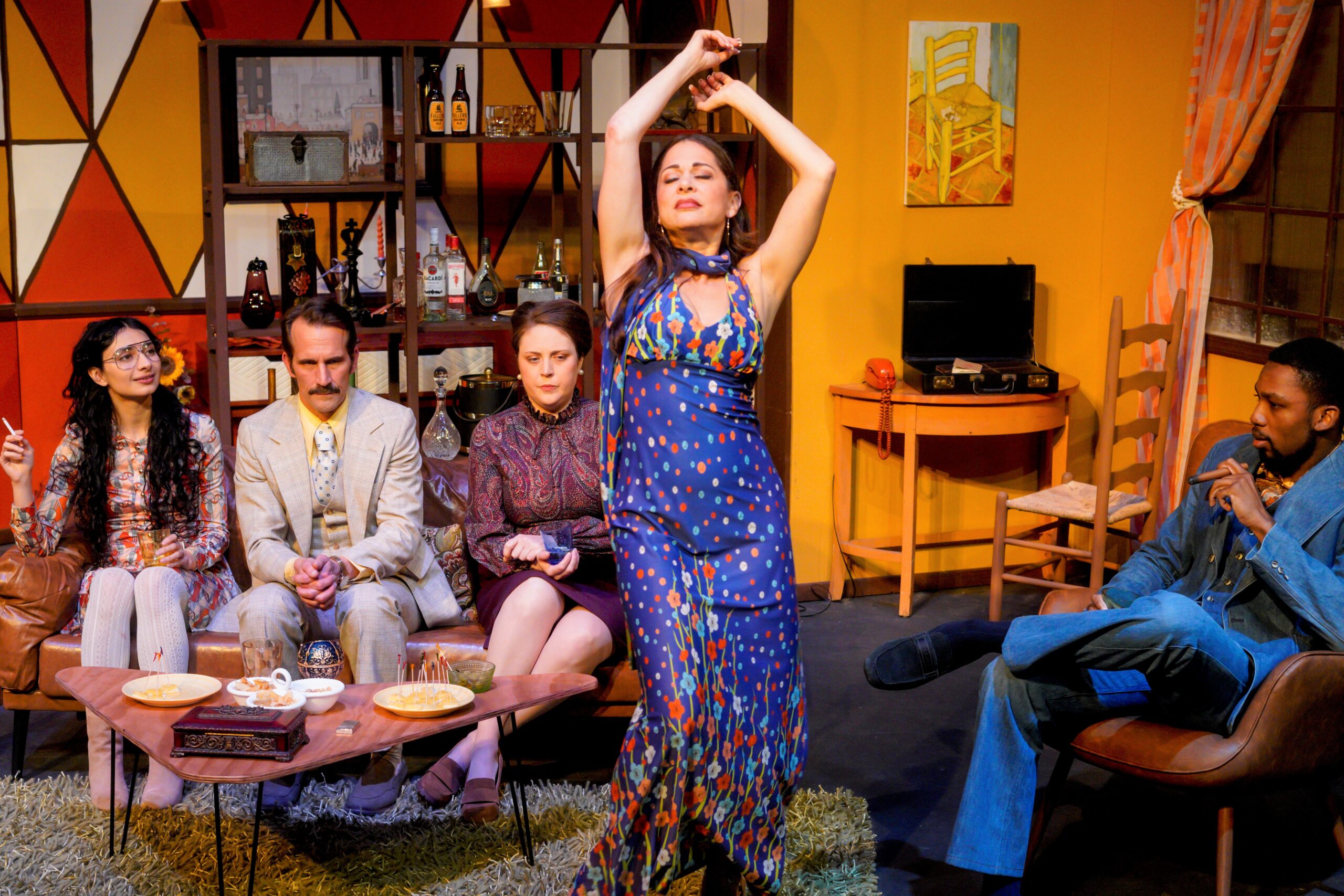 I haven’t ben to a party in years (Thanks, COVID).

So, when I was invited to “Abigail’s Party,” I was psyched. But I never saw Abigail, a 15-year old whose first bash is taking place in another house nearby the adult gathering we’re in.

Pretty much from the get-go, I felt like I’d wandered into George and Martha’s unwelcoming abode in “Who’s Afraid of Virginia Woolf?”

Here, too, there are two couples (plus Abigail’s taciturn, worried and appalled mother). Both pairs are in ruthless, destructive marriages. Here, too, there is an inordinate amount of alcohol served — mostly forced — by the Hostess from Hell, who also, like Martha, comes on to her virile young guest in a sexually provocative manner.

Edward Albee’s characters, however, had their wit, intelligence and charm, while their English counterparts, created by Mike Leigh, are consistently uninteresting and unpleasant.

Laurence (Francis Gercke) is a pretentious prig and a pedant, toggling between forgetful milquetoast and aggressive ass.

Beverly (Jessica John) is completely hateful: she produces an endless amount of verbal drivel, all the while undermining others including, or especially, her mate. It’s a palpable relief when finally, each of the other characters, in turn, tells her to shut up.

Angela (Liliana Talwatte), a nurse, seems naively game for almost anything. Her hunky husband, Tony (Carter Piggee) may be, too, but unforthcoming to an extreme, he remains something of a cipher.

That leaves the fifth wheel, Sue (Michelle Marie Trester), who says almost as much with her eyes and facial expressions as Beverly does with her pouty, logorrheic mouth.

Playwright/screenwriter/director Mike Leigh, a five-time Oscar nominee, is an acquired taste for Americans, though he’s willy popular in his native land.

First in theater and then in film, he has famously worked for extended periods without a script, with only a basic premise given to his carefully-selected (often repeated) cast, which improvs its way to developing characters and story. Some of his better-known ‘devised’ film works are “Secrets and Lies” (1996), “Topsy-Turvy” (1999), “Vera Drake” (2004) and “Mr. Turner.”

Leigh has said that he makes “very stylistic films, indeed, but style doesn’t become a substitute for truth and reality.”

As we all know, truth and reality don’t always make for engaging (or amusing) films or plays.

This 1977 play was filmed for BBC Television, and on a stormy night, at a time when there were only three channels available, it was viewed by 16 million people. In 2000, it was voted by the British Film Institute as #11 on the list of the ‘100 Greatest British Television Programmes.’ Go figure.

“Abigail’s Party” is intended to be a suburban sitcom, a satire of the tastes and aspirations of the “new middle class” that emerged in Britain in the 1970s.

More a situation than a comedy, the play and its characters are brittle, bitter and brutal.

Awkwardness abounds, in the clear lack of communication and commonality among these virtual-stranger neighbors.

Even without the telltale British accent disparities (Beverly, Laurence, Angela and Tony are written as social-climbing lower-middle class, while Sue, the ex-wife of an architect, is decidedly old-school middle to upper-middle class), the distinctions are clear enough.

Yet the humor is lacking, though the garish ‘70s style and questionable taste (eye-popping set by Tony Cucuzella) may be familiar to American audiences.

Under the direction of English-born Rosina Reynolds, the performances are impressive; the pacing and timing are spot-on.

But nothing much happens for most of two hours, while Beverly blathers away. Then there’s a sort of cataclysmic ending.

Odd time for a play that celebrates smoking, drinking, strong-arming men and frivolous women. Not my kind of party.