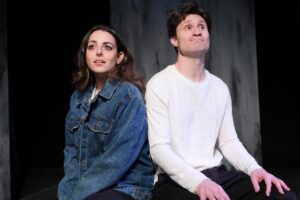 A love song is usually pretty easy to decode and decipher. John Kolvenbach’s play by that name, not so much.

There’s a brother and sister. She’s a tightly-wrapped, driven Type A++ executive whose anger and disgust with others (especially her invariably “incompetent” interns) is palpable, capricious and destructive..

Her brother is … well, different. Taciturn, solitary, reclusive. When he talks, he says strange things.

Her husband, a fairly rational being, thinks her brother is “insane.”

And then, the brother falls in love, waxing poetic, becoming verbose and hyper-sexualized. His beloved, Molly, who appears first to burgle his barren apartment (he has little more than a mug and a spoon), is smart, attractive, demanding, aggressive and violent. Or is she?

To say much more would be to ruin the experience for you. Suffice it to say, you’ll come out with more questions than answers.

It’s all about fantasy vs. reality, passion vs. urban pressure, boredom and routine.

The 80-minute play could be viewed as a quirky rom-com — or a fable. It could be seen as an empathic paean to difference and uniqueness… or a glorification of imagination, delusion, even mental illness. It might ask if love is a springboard to joy, delirium … or madness.

Amidst the many eccentricities of the piece, there is certainly humor. And fast-paced, often clever dialogue.

At Scripps Ranch Theatre, under the direction of Claire Simba (who recently directed “The Mango Tree” at Moxie Theatre), the performances are outstanding.

Paul Eddy makes Beane an enigmatic yet endearing oddball. As his older, caring but hovering sister, Joan, Leigh Akin is aptly high-strung and a little loopy herself. John DeCarlo does effective double-duty as Joan’s husband (who gets turned on by the smell of melons) and a somewhat surly, tattooed waiter. Claire Kaplan is a stunning, potent delight as the nihilist/anarchist/guerrilla Molly, who proclaims, as if it’s a manifesto of the play itself, “Death to literalism!”

The impressive design (set by Alyssa Kane, lighting by Jared Jacobs, sound by Robert May) supports the production well, with its sleek, high-end décor for Joan and Harry’s urban retreat, complete with a fully stocked — and frequently used — bar. (Their costumes could have been more commensurately upscale). Off to the side, with its eerily movable walls, is Beane’s dark, barren, ascetic lair.

There’s a message in there about materialism and the necessity (or not) of possessions.

Playwright Kolvenbach clearly had a lot on his mind when his work premiered at the celebrated Steppenwolf Theatre in Chicago in 2006. When, later that year, it was produced in London’s West End, it was nominated for an Olivier Award (the English equivalent of a Tony).

What resonance or relevance it has to your own relationships and family is up to you to decide.