“CATCH ME IF YOU CAN” at San Diego Musical Theatre 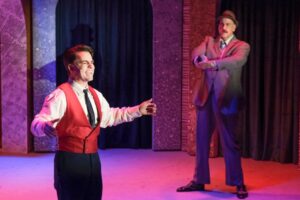 Can you ever believe a conman?

When Frank Abagnale, Jr. published his memoir in 1980, he told a pretty wild story.

From age 16-20 (1964-1968), after his parents divorced, and he ran away from his New York home, he went on a massive crime-spree, forging checks and making a ton of money posing as a doctor, a lawyer (serving as assistant state Attorney General in Georgia) and a Pan Am pilot who logged over 2 million air miles.

But over the decades, and as recently as last year, journalists and many others have come forward, debunking just about every element of the tall tale.

Still, it’s a pretty entertaining story. And show… which is now being presented in a lively San Diego Musical Theatre production.

This is the first post-pandemic venture for SDMT, which has created a new venue for the occasion.

Re-purposing a former Kearny Mesa warehouse, the company has fashioned a pleasant 149-seat, mostly raked theater, with a fairly wide and deep stage, which they say will only be utilized for this 2022 season (with future use by their educational programs). It’s a black box, meaning that the seats can be reconfigured in different ways for different shows.

The set (designed by Mathys Herbert), comprises a series of colorful arches that can be moved, detached and rearranged, not always to meaningful effect. There are also static black-and-white projections, mostly on two screens flanking the stage, which offer city, year and sometimes, cultural context.

The musical, penned by the award-winning creators of “Hairspray” (book by Terrence McNally; music by Marc Shaiman, lyrics by Shaiman and Scott Wittman), was nominated for four Tony Awards, including Best Musical. The only win (Best Actor in a Musical) was for Norbert Leo Butz, who played Carl Hanratty, the dogged FBI agent who chased Abagnale relentlessly.

Aptly casting Abagnale as the ultimate showman, the piece is framed as a series of ‘60s TV variety show song-and-dance numbers (there’s a lot more music than dialogue throughout).

At the outset, just before finally being arresting in the Miami Airport, Abagnale (wonderfully talented and charismatic Beau Brians), begs his captor (funny/poignant and imposing Beto Fernandez) to let him tell his own story, which leads to the rousing opening full-cast opener, “Live in Living Color,” and everything that follows.

There are scantily-clad, short/tight-skirted chorines in many numbers, though first-time director Allison Spratt Pearce (an outstanding musical theater performer in her own right) does her best to minimize the show’s misogynistic tendencies (Abagnale was also something of a womanizer).

Though he ultimately has a serious love interest, Brenda Strong (compelling Adelaida Martínez), this is basically a guy-triangle story:  with Frank Jr. as the apex, and his father (effectively slimy Paul Morgavo) and his FBI tail, Hanratty (Fernandez) offering Good cop/father and Bad/amoral Father alternatives.

Frank Jr. has a mother, too (French-accented Andrea Petsinger) and so does Brenda (Alyssa Jane Austin, credibly subbing for Debra Wanger at the performance I attended). Brenda’s dad (an uptight Ted Leib) is skeptical of Frank at first, mostly about whether or not he’s a Lutheran. But soon, he, too, buys into the BS.

Brians, with his charm, looks, winning smile and wide-ranging voice, could convince anyone of anything. He makes for a perfect Mutt-and-Jeff match with Fernandez, who’s more than a head taller than Brians.

The singing is superb throughout (though the miking was a bit finicky at times) and the dancing (choreographed by Xavier J. Bush), though not as varied as it could have been, is well executed.

“Catch Me If You Can” is a period piece, to be sure, but true to the period. And SDMT gives it a spirited run for its money.

Despite all the high-flying, ill-gotten gain the show celebrates, in the end, Frank actually expresses gratitude to Hanratty (who was loosely based on real-life FBI agent Joseph Shea), saying, “Thanks for not giving up on me.”

These days, at age 73, Abagnale consults for security firms and give numerous speeches. No matter what he’s telling his audiences, I bet he’s pretty convincing.