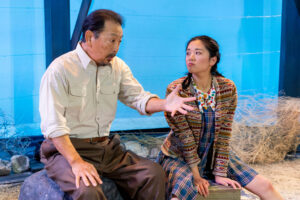 Last summer, for the first time in the many years I’ve lived in San Diego, I finally got to Manzanar in eastern-central California, one of the ten Japanese internment camps of World War II.

It was barren, desolate and sizzling — well over 100 degrees (nestled between the Sierra Nevada and Inyo Mountains, the camp’s weather is equally extreme in winter).

Hard to imagine more than 110,000 West coast residents of Japanese descent, many of them American-born citizens, incarcerated in these isolated desert outposts, surrounded by barbed wire and armed guards in surveillance towers.

February marks the 80th anniversary of Executive Order 9066 which, signed by President Franklin Roosevelt in 1942, deprived so many citizens of their rights, calling them “a threat to national security” and authorizing their immediate evacuation (most had just one week to sell off all their land and belongings, at considerable financial loss).

That horrific time is the focal point of the world premiere, “Desert Rock Garden,” the first full-length play by Roy Sekigahama, who has won a number of awards for his shorter works.

It’s set in the Topaz camp in Utah, where 11,000 Japanese-descended men, women and children, mostly from the San Francisco Bay area, spent 3½ gruesome years. There were no gas chambers, but it was a concentration camp nonetheless.

In Topaz, we meet a pair of unlikely friends: a young girl, Penny (Chloris Li) and an old man called Fuzzy (Lane Nishikawa).

She’s a rebel; he’s a loner. Both are estranged from their families. Both are lonely and resentful.

Penny has left the constraining camp school, but she bonds with Fuzzy, helping him to create the titular garden that he hopes will bring him solace and remind him of home.

Having sat in quiet contemplation at Japan’s most famous rock garden, in Kyoto’s Ryoan-ji Temple, I can attest to the relaxing, ruminative effect of the spare rocks and meditatively-raked gravel.

Fuzzy finds dusty topaz stones and drooping plants to create his safe space. He helps Penny calm down and mature. She helps him to read English and re-connect.

They become close and mutually dependent, until the Topaz camp, like all the others, erupts in violence when all the internees are required to sign a “loyalty questionnaire,” pledging to serve in the U.S. armed forces (with no guaranteed reinstatement of rights) and renounce allegiance to the Japanese Emperor.

The divisive and incendiary response to this document was a prominent plot-point in “Allegiance,” the musical that starred actor/activist George Takei, loosely based on his and his family’s experience at the Heart Mountain internment camp in Wyoming.  The show premiered at The Old Globe in 2012, and went on to Broadway and a filmed version.

That production highlighted the Big Picture issues. This one is more intimate, focusing on one relationship that quietly but powerfully illustrates the resilience, camaraderie and indomitable spirit of the victims of one of the more heinous, xenophobic and ghastly mortifying chapters of American history.

The parents of San Diego playwright Sekigahama were also interned during the war, but in his Program Notes, he says “they never spoke about it, except to say that they made lifelong friends.”

Maintaining humor and heart, without becoming sentimental or maudlin, Sekigahama teaches us much about a terrible time in our history that few of us learned about in school. (Apologies and reparations were made by the U.S. Government in 1988).

Documentation in the lobby of New Village Arts Theatre, where the work was first seen as part of the 2019 Final Draft New Play Festival, fills in some of the details of that era, including the reverberations here in San Diego, where most Japanese American residents were evicted, evacuated and sent to the Poston camp in southwestern Arizona.

In Sekigahama’s play, Penny has returned to Topaz 20 years after the internment, looking for the garden, to make peace with her memories of Fuzzy and her younger self.

The silences and leisurely pace of the production, expertly directed by Yari Cervas, a Pilipinx teaching artist and somatic worker specializing in restorative justice, cultural memory and trauma recovery, pairs ideally with the themes and the garden itself.

Her cast is outstanding. Nishikawa, a busy actor who spent ten years as artistic director of San Francisco’s Asian American Theater Company, is bent and gruff, often grunting and dismissive. But it’s beautiful to watch him soften and open up, in response to Li’s energetic, relentless, insouciant Penny. Both have hurts and secrets to reveal, once trust is secured.

Marc Akiyama’s marvelous original music and sound design ranges from the mournful plucking of a samisen, perfectly paired with a piano, to Bing Crosby’s 1944 recording of Cole Porter’s “Don’t Fence Me In,” also sung from offstage by the groom at a Topaz wedding ceremony that, thanks to Fuzzy, proves crucial to Penny’s future.

It’s impossible not to be deeply moved and touched by this fictional but wholly believable, heartfelt and heartwarming new play.