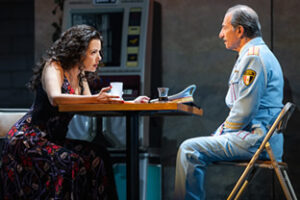 VENUE:  The Civic Theatre, brought to us by Broadway San Diego

Ever since Moses stuttered to Pharoah, Israel and Egypt have had a pretty fraught relationship.

But when opposing groups come together as individuals, despite language differences, commonalities can be found, and with a little English and ingenuity, communication can succeed, and lives can intertwine in unexpected ways.

Sometimes, music crosses all borders and breaks down barriers.

Actually, there isn’t much cross-cultural conflict in “The Band’s Visit,” the 2017 ten-time Tony Award-winning musical based on the 2007 film of the same name.

But the whole premise is based on a giant linguistic SNAFU.

The setting is Israel, 1996, when the 8-man Alexandria Ceremonial Police Orchestra is scheduled to perform in Petach Tikva but mistakenly takes a bus to Bet Hatikva (they sound quite similar; it becomes a running joke).

Instead of a large industrial center near Tel Aviv, with an Arab Cultural Center, they are stranded (for one night) in a desolate outpost in the middle of the Negev desert.

“Welcome to Nowhere,” the desultory residents sing. The place is bland and boring and blah, they insist. Nothing happens, nothing changes.

The baby-blue-uniformed musicians are a surprise, and a relief from the tedium.

This small, intimate story (which would play better in a small, intimate space) is all about waiting and hoping. And experiencing the unexpected. Everyone wants change, but they fear it, too.

There’s a heart-rending ache in so many of the lovely songs, played by outstanding musicians and sung with glorious harmonies by various combinations of the skillful cast of 20.

The Middle-Eastern-inflected score ranges in style from ballad to blues, Egyptian classical to klezmer to jazz. The (somewhat slight) book is by Tony Award-winner Itamar Moses, a former Old Globe playwright-in-residence (“The Four of Us,” “Nobody Loves Us”), based on the screenplay by Eran Kolirin.

The evocative music and often poetic lyrics are by Tony Award-winner David Yazbek, who premiered two musicals at The Old Globe (“The Full Monty,” “Dirty Rotten Scoundrels”). The outstanding orchestrations are by Jamshied Sharifi, with additional arrangements by Andrea Grody.

The authentic sound comes from Middle Eastern instruments such as the lute-like oud, goblet-shaped darbouka drum and tambourine-like riq, augmented by virtuosity on violin, cello and clarinet, as well as ‘Arabic percussion.”

At the center of the (minimal) action is the orchestra conductor, the widowed Tewfiq (a wonderfully still, controlled Sasson Gabay, who originated the role in the film, winning the Best European Actor Award); and his meeting and coming-together with the sensual, aching but cynical divorcée, Dina (Janet Dacal, a Cuban-American whose Israeli accent often sounds less than credible, though her singing is superb).

When I saw clips of Katrina Lenk (who won a Tony for her portrayal of Dina on Broadway), and her live performance on the Tony broadcast of her signature number, “Omar Sharif,” it was a titillating knockout. In this touring production, the song is more subdued and wistful than sensuous. But it’s still bewitching — here perhaps more introspective than seductive.

There are other stories — a battling husband and wife with a new baby (music soothes all their souls), and a painfully shy guy (Coby Getzug) who’s too terrified to approach the gal he likes and is coached by the Egyptian Don Juan, Haled (Joe Joseph), the terrific trumpeter obsessed with American jazz great Chet Baker. The killer violinist (Yoni Avi Battat) also bears mentioning.

The sense of sadness, regret and lost chances stubbornly clings to Dina and Tewfiq, though the brief visit leaves the town with a lingering sensation of hope.

The set (Scott Pask), lighting (Tyler Micoleau) and sound (Kai Harada) provide an unpretentious impression of a time and place.

No histrionics or big production numbers here. “The Band’s Visit” is a lovely, bittersweet piece that may just help restore your faith in the power of empathy and understanding.