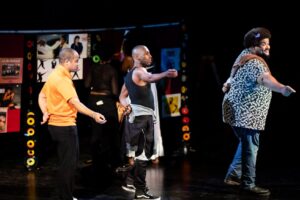 As so many great relationships do, it all began with Breaking Bread.

That was the name of the February 2020 dinner gathering organized by The Old Globe, to bring together local black theater artists and the cast of August Wilson’s “Jitney,” which was running at the time.

“It was so wonderful,” says Joy Yvonne Jones, President and co-founder (with Rich Soublet and Zack King) of the San Diego Black Artist Collective (BAC), which was inspired by that first meeting.

“Everyone was so excited about being in the same room together and fellowshipping,” she continues. “We wanted to come together again. Then the pandemic hit. But after the death of George Floyd, we knew we had to get together again. and we’ve stayed active.”

The mission of BAC is “to facilitate a foundation of support and resources that provides a sense of community, a safe haven, and a sanctuary for artist development.”

“We’re not a theater,” says Jones. “We won’t schedule a season. But we will produce work that is “unapologetic, authentic and healing to the Black experience across the diaspora,” as the Mission Statement puts it.

This week, BAC kicks off the inaugural Say It Loud Festival, to celebrate and commemorate Juneteenth.

Also known as Freedom Day, Jubilee Day, Liberation Day and Emancipation Day, Juneteeth is a holiday that marks the emancipation of those who had been enslaved in the United States.

Originating in Galveston, Texas, it is now celebrated throughout the U.S. every year on the anniversary of the June 19, 1865 announcement of General Order No. 3 by Union Army general Gordon Granger, proclaiming freedom from slavery in Texas.

Although President  Lincoln‘s Emancipation Proclamation had officially outlawed slavery almost two and a half years earlier, enforcement in Texas, the most remote of the slave states, had been slow and inconsistent. It was the final holdout.

“Growing up in Houston,” says Jones, “Juneteenth was always a huge deal, that involved the entire city. It was a big day. There was a downtown parade, and people were given the day off from work. I thought it was a national holiday! When I moved to San Diego in 2016 [her husband of six years is a Marine stationed at Camp Pendleton], I saw that there wasn’t much happening here for Juneteenth. I’ve been talking about a Juneteenth Festival ever since. (She didn’t even take time off during the pandemic, though she welcomed a family addition, Leo, nine moths ago).

“We asked our membership —about 40 strong — what they might like to do for Juneteenth,” says Jones. “We wanted to see if local theaters might be interested in a collaboration. I submitted a proposal to The Old Globe, La Jolla Playhouse, Cygnet Theatre, San Diego Rep, Diversionary, Moxie and Lamb’s. Every one of them expressed interest. Because of Covid, everything was in flux, and some couldn’t be a part of what we were planning. But they agreed to promote the event and remain open to other projects in the future.”

Ultimately, five San Diego theater companies are participating in the Festival, and BAC will join The Old Globe in its June 19 collaboration with the George L. Stevens Senior Center on June 19 (12-1:15pm at the Lowell Davies Festival Theatre (info at theoldglobe.org)

BAC will also be part of another event on June 19, organized by Artists 4 Black Lives. Last year, acclaimed local actor-singer Eboni Muse and friends/allies held a sit-in/sing-in performance and protest in Balboa Park. This year’s event will start at 1pm on June 19, in Balboa Park’s Pepper Grove Park. For the “nonstop live entertainment,” Muse and her group are collaborating with BAC, the youth organization Black in PUSD, and sponsor OB Playhouse (details at facebook.com/artists4blacklivessd).

The Opening Night Ceremony for BAC’s Say It Loud Festival will take place on June 13 (6:00-7:15pm; tickets at newvillagearts.org/event/Juneteenth-jubilee), outdoors on the stage created by New Village Arts Theatre at the Flower Fields in Carlsbad; it will also stream online.

Milena (Sellers) Phillips directs an array of performances, including poetry recitations, the history of Juneteenth, the colors presented by the Buffalo Soldier Mounted Cavalry (a troupe of volunteer re-enactors), a keynote speech by Prof. T Ford, and the singing of the Black National Anthem, “Lift Every Voice and Sing,” a poem written in 1900, set to music in 1905 and recorded in 1923 as The National Negro Anthem. In 2016, it was added to the National Recording Registry.

The rest of the Festival will feature four plays/presentations, running in repertory throughout the week.

Ahmed K Dents, of the San Diego Repertory Theatre’s Stay and Play Book Club, will moderate a live online discussion, led by Real J. Wallace, about “The Fire Next Time,” James Baldwin’s seminal 1963 essay collection that some consider to be one of the most influential books about race relations of the 1960s. 7:30pm

Also on June 14, Moxie Theatre will present the virtual world premiere of a solo play, “The Mango Tree,” written by, co-directed (with Claire Simba) and starring Bibi Mama, originally created as her thesis project for her Master’s Program at USD. Inspired by West African folktales, this exploration of loss, an homage to Mama’s father, best-selling author Dr. Raouf Mamma, is the story of a sister and brother, a river goddess and a mango that is just out of reach. The show, filmed on Moxie’s stage, will be shown on June 14 at 6pm, June 15 and 18 at 8:30pm, and June 19 at 6pm. (Pay What You Can, at moxietheatre.com).

Tuesday June 15 is the premiere of “And We Danced,” written by hip hop artist, playwright and activist Miki Vale, directed by Joy Yvonne Jones. The piece focuses on LGBTQ activist/pioneers Ruth Ellis and Babe Franklin, whose queer/inclusive Detroit juke joint was known as the African American “gay spot” in the 1950s and ‘60s. Streaming at 6pm June 15, 8pm June 18 and 8:30pm June 19.

On Wednesday, June 16, take a musical journey through the evolution of black music, from African drums to contemporary hip hop. “Get On Board” was created by Joy Yvonne Jones, John Wells III, Bryan Barbarin and Eboni Muse, with music direction by Leonard Patten and Bryan Barbarin. There will be seven singers and a 6-piece band. Jones has found this collaboration “amazingly fulfilling.” She wrote poetry for the presentation, and along with singer Andre Caston, will be dancing throughout (Jones studied African dance for three years in college). Streaming at 6pm on June 16 and 18; 8pm on June 17 and 7pm on June 19.

BAC partners with the San Diego Rep at 6pm on June 17, taking over their regular “We Are Listening” conversations. This time, the focus is on film, with Milena (Sellers) Phillips and Zack King hosting three local filmmakers: John Brooks, Michael Taylor and Jayden Dial.

Of this major undertaking, Joy Jones says, “I’ve been scheming and dreaming for so long, it’s so cool when everything is coming to fruition. I didn’t think it would happen. And what’s great is, these shows are not centered on the trauma of Black people. Even when, as in “Get on Board,’ the facts are often painful, there’s also the joy: how we survive, how we love, how we can freely be who we are.

“This is a celebration that was needed,” she continues. “It took years for my dreams to come to life. This is definitely the right time.”