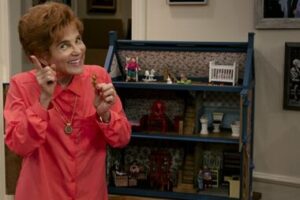 Everyone deals with trauma differently. While no one escapes the haunting of the horrors, some manage to move forward with positivity.

One of those is Ruth K. Westheimer. The diminutive (4’7”) Radio/TV sex therapist will simply not tolerate negative energy  — or failure (“When I am knocked down, I bounce right back up”).

So she tells us in “Becoming Dr. Ruth,” a witty, poignant, inspiring look at her life before her unlikely rise to international fame. In a filmed performance from North Coast Repertory Theatre, the acclaimed actor Tovah Feldshuh portrays the tiny dynamo.

Written by Mark St. Germain (who recently found out that his heritage is 1% Ashkenazi Jewish), the 2012 play chronicles Westheimer’s harrowing life experiences. Born Karola Ruth Siegel in Germany, she was an only child who, with the rise of the Nazis, was orphaned at age 10, sent away from Frankfurt  to Switzerland on a Kindertransport, while her parents, aunt and grandmother were carted off to concentration camps.

In Switzerland, she worked as a menial under tough conditions. From there, she went off to Palestine and joined the Haganah, the underground paramilitary army, where she was trained as a sniper and a messenger (“I was small and fast; I’m also a great sharpshooter”).

During the 1947-48 Palestine War (known in Israel as the War of Independence), she was seriously wounded by shrapnel. At age 20, it took her months to learn to walk again.

Her next stop was Paris; there were no medical schools in Israel for her Husband #1 (a short-term marriage). She took courses at the Sorbonne, and ultimately made her way to America, where she struggled to be a single mother, learn the language, and get an advanced education.

She was feisty, dogged and relentless in her pursuits. Through three marriages and multiple setbacks, she maintained a fierce tenacity and positive mental attitude, coupled with unremitting gratitude for her survival. He grandmother had told her, “Always smile and be cheerful.” She never forgot that counsel.

In New York, Ruth received a scholarship to the New School for Social Research, where she earned a Master’s degree in Sociology (somehow managing to skip a bachelor’s degree). She learned English by reading True Confessions magazine (“This was my Dickens and Shakespeare”).

When her daughter, Miriam, was just one year old, Ruth got a divorce from Husband #2.

In 1961, she met Fred (Manfred) Westheimer, the love of her life. They married less than a year later, and son Joel soon arrived. Ruth said that snagging Fred was her “greatest Westheimer Maneuver”

But judging by her life story, and her appearance at the post-show talkback after the filmed performance, there were many other “maneuvers” that moved her along.

At some point, she realized that she wanted to specialize in sex education, and by 1970, she had a Doctorate in Education from Columbia Teachers College (part of Columbia University).

Over the years, she has taught at Columbia as well as at Princeton and Yale. She’s written 45 books, with sex advice for kids, teens, seniors, the world. She even created a Good Sex board game.

“People need to learn about sex,” she’s said. “A lesson learned with humor is a lesson remembered.”

When we meet her in “Becoming Dr. Ruth,” it’s 1997 and she’s grieving her darling Fred, who died two months earlier. She’s packing up to move from the Washington Heights apartment they shared for the 36 years of their marriage.

Wisely, St. Germain, while dispensing myriad quotable quotes from Dr. Ruth, also acknowledges the audience (a weakness in many solo shows; who is this character supposed to be talking to?). Ruth greets us enthusiastically (as she does everything), and says she’s always enjoyed going to the theater. “Tonight, the theater comes to me!,” she marvels. “We can visit while I pack.”

She does a lot more talking than packing, as she wanders around, in constant motion, picking up objects in the overstuffed room (“I’m a packrat,” she confesses), items that trigger memories and stories from her (overstuffed) life.

In the hands of Feldshuh, four-time Tony and two-time Emmy nominee, Ruth is energetic, charming  and entertaining company.

Feldshuh was North Coast Rep artistic director David Ellenstein’s unequivocal choice for the role. He never thought she’d agree. But Feldshuh is a gifted, experienced solo artist. She has successfully played Ruth Bader Ginsburg and Israel Prime Minister Golda Meir. In fact, her performance in William Gibson’s play, “Golda’s Balcony,” became the longest-running one-woman play in Broadway history. (It was a huge success as a 2019 film, too).

In the talkback, Feldshuh says she was honored to be asked to take on Dr. Ruth, who she has known for years (Ruth attended the weddings of both Feldshuh’s daughters). Feldshuh was fortunate to be able to spend time with Westheimer and consult with her and with playwright St. Germain during the extremely brief three-week rehearsal period.

Ellenstein and his theater have given her a superb production to play in. The scenic design (Marty Burnett) is outstanding, so chock-full of items of significance to Westheimer, from the many photos (Dr. Ruth and Bill Clinton! Dr. Ruth and “a Beatle!” She wasn’t sure which one, but it looked like Paul); memorabilia from her youth, her long marriage to Fred, photos of her children, grandchildren, parents and Grandma. When the latter are projected behind her, Dr. Ruth is delighted (“Stage magic!”). The cinematography and editing (by Aaron Rumley, also responsible for projections and sound design) is excellent and intimate, bringing us as close as streaming can to being there.

As the filmed version continues this month, Feldshuh is performing the role live on Long Island, at the Bay Street Theatre in Sag Harbor (6/17-6/27), a production mounted in association with North Coast Rep.

“Nobody knows me like Tovah Feldshuh,” the real Dr. Ruth exclaims after the show. Feldshuh is hoping to reprise her performance on Broadway.

“It should be seen by the world,” chirps Dr. Ruth.

From her mouth to some producer’s ears.

In the meantime, while it’s here for the viewing, don’t miss this inspiring story of courage, resilience, perseverance, survival and indomitable spirit.