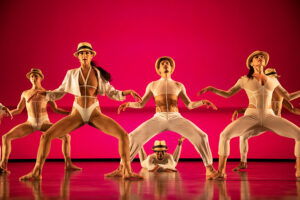 The groundbreaking, revolutionary choreography of Bob Fosse (1927-1987) has always been unique and exhilarating.

“Bob Fosse’s Dancin’.” the new revival of his 1978 all-dance musical production, now in a limited six-week, pre-Broadway run at The Old Globe, delivers the goods. And then some.

There’s also so much more: stratospheric leaps, leg extensions and high-kicks; jaw-dropping athletic/balletic numbers; bluesy-jazzy moves; even marches and a tap routine. All from a corps of 20 fantastic dancers who can also sing and act. Triple-threats, indeed.

The production includes garish colors and eye-searing lighting (David Grill); instructive/decorative video backgrounds (designed by Finn Ross), projected on a 50’x30’ wall; and constantly-changing, body-baring, bespangled or diaphanous costumes (Reid Bartelme and Harriet Jung). Two hours and 20 minutes of all this multisensory stimulation feels like too much of a good thing.

Director/musical stager Wayne Cilento, who was nominated for a Tony Award when he was a featured dancer in the Fosse original, is trying to be true to Fosse’s conception and choreography. But the additions and attempts at making the piece more relevant instead feel superfluous, out of place and time.

From the moment the Emcee (engaging Manuel Herrera) emerges between the mega-sized industrial metal scaffolding (scenic designer, former San Diegan and Sledgehammer Theatre co-founder Robert Brill), we’re made aware that we’re in for something totally different: “an almost plotless musical… with no villains, no baritone heroes, no orphanages, no Christmas trees, no messages” [that got a big ovation the night I was there].

The frenetic first act has a decidedly ‘70s sensibility — and that’s appropriate, since it was the late ‘70s when Fosse premiered the piece, which ran on Broadway for four years, and was nominated for seven Tony Awards, winning two: for Fosse’s choreography and Jules Fisher’s lighting. The one segment that was jettisoned by Fosse after one out-of-town performance, “Big City Mime,” is the most hectic and frenzied.

Things take a turn in the second act, where the updates come into play (credited to text consultant Kirsten Childs, who appeared briefly in the original production), including a ‘racially sensitive’ “Mr. Bojangles,” a gratuitous press interview with ‘Bob Fosse’; the use of a cellphone; mention of the Bechdel Test (Do more than two women talk to each other, and do they discuss something other than men? The answer here is No); and an archival video montage of American history (titled “America?”), focused on political figures, protests and civil rights abuses, and culminating with inspiring words from the young poet Amanda Gorman at the Biden inauguration. But why is that necessary? There’s nothing else political in the show.

The sequence that originally featured four women who discover they’re all in love with the same lousy, unfaithful guy (now it’s three women and a man who are comparing notes), is a weak attempt to inject some sense of narrative or, with the aforementioned cellphone, an appeal to ‘woke’ younger audiences.

Women aren’t given much agency here overall, though Ioana Alfonso is featured in “The Female Star Spot” and Khori Michelle Petinaud (the only dancer who is given a name) gets to show off her physical prowess (in “The Big Deal” segment) as well as her sultry vocal chops, singing the Ray Henderson/Lew Brown classic, “Life is Just a Bowl of Cherries.” Yani Marin has the final word, and takes a Fosse pose, alone, in silhouette, at the end of the evening.

The male dancers are provided with much more showy things to do. Standouts are Peter John Chursin, Kolton Krause, Jacob Guzman and Jovan Dansberry.

Fosse was a 9-time Tony winner (in addition to garnering an Oscar and a few Emmys, for shows such as “Chicago,” “Cabaret,” “Damn Yankees” and “Pippin”).

He was undeniably a genius, tortured by inner demons, as we know from his autobiographical film, “All That Jazz,” and the recent TV series, “Fosse/Verdon,” which showed how much credit was due but generally denied his third wife, Gwen Verdon. Both that show and this new revival were produced in cooperation with their daughter, Nicole Fosse.

Fosse loved to push the envelope, and push dancers to their limits. What’s missing here is the sharp precision and uniformity. Cilento has said he wanted to give the dancers the freedom to make the moves their own. But the gain in individuality is a loss of flawless synchronicity.

Like singers and Sondheim, not everyone can perform Fosse dances. But by all accounts, it’s a thrill to have the opportunity. You can see joy, and sometimes even strain, in the dancers. As audience, you can relish the intricacy, variety and immediacy of his choreographic creations.

COVID Protocol: Proof of vaccination and mask-wearing are no longer required, but masks are strongly recommended inside the theater.