“IN THE HEIGHTS” at San Diego Musical Theatre 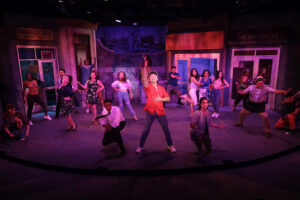 “In the Heights” is set in the uppermost part of Manhattan, Washington Heights, a barrio that serves as a microcosm for the Latinx immigrant experience.

Staging the award-winning musical by Lin-Manual Miranda (concept, music and lyrics, with book by Pulitzer Prize-winning playwright Quiara Alegría Hudes) in a small space like San Diego Musical Theatre’s temporary Kearny Mesa digs, makes it intimate, maintaining the sense of a tight, tightly-packed community. And this show is all about community and family. (The recent John M. Chu film was, in my opinion, overblown and hyperbolic)

In the capable, confident, knowing hands of director Carlos Mendoza (who choreographed the show at Moonlight Amphitheatre in 2017, for which he was lauded by the San Diego Theatre Critics Circle), the musical feels personal. It’s moving, energetic and upbeat, thanks to the skillful choreography of Laurie Muñiz.

The cast is outstanding, a wonderful ensemble with strong singing voices (though the lead women seem to have been encouraged to belt at ear-piercing volume at times).

It’s sad that SDMT is no longer supporting local live musicians, but the pre-recorded music works well to maintain the flow and the energy.

At the center is adorable, talented and charismatic Sebastian Montenegro as Usnavi de la Vega, the role Miranda assayed himself Off and On Broadway, where the show ran for nearly three years, and garnered four Tony Awards in 2009 (it was nominated for 13).

All the primary characters are excellent: Charlie Orozco as Sonny, the young, feisty, funny cousin of Usnavi, helping at the bodega that centers the neighborhood; Arianna Vila as Vanessa, the upwardly-mobile hairdresser whom Usnavi is too shy and awkward to ask out; Liliana Rodriguez and Lena Ceja as her salon partners-in-gossip (“No Me Diga”); Vanessa Orozco as Nina, the Great Hope of the area, who won a scholarship to Stanford; Jordan Markus as her main squeeze, Benny, who isn’t accepted by her parents (Berto Fernández and Daisy Martínez) because he’s not Latino, though he’s worked diligently at their Car Service business for years; Analía Romero as Abuela Claudia (who really isn’t anyone’s actual grandma, though she grounds the whole block with her wisdom and her “Paciencia y Fe”); and the Piragua Guy (Ramiro Garcia, Jr.), who tries to keep them all cool in the sizzling summer heat.

These three generations are painfully aware of the sacrifices made by the relatives who brought them to the crowded New York enclave they call home. As rents rise, they feel the crunch of encroaching development and gentrification. It could all be slipping away — this little island they created in the shadow of the George Washington Bridge.

Life decisions have to be made — stay or go, dig in or move on. The sense of change and impending loss is palpable.

We’re watching three days in the life of this found-family, including a blackout, a spontaneous “Carnaval del Barrio,” lovers who come together in the darkness and under the Fourth of July fireworks (the set by Mathys Herbert and lighting by Michelle Miles are quite effective, as are the costumes by Janet Pitcher and the hair and wig design of Albee Alvarado).

There’s death and rebirth, newfound love and separating friends. In being forced to make choices, they’re all learning what’s most important in life, and finding their place in the world.

This exuberant slice of life draws us in to these issues and problems, large and small. We not only watch the concerns and conflicts and connections of an immigrant community. For a fleet 2½ hours, in this cozy space and impressive production, we become a part of it all.