A Eulogy for the San Diego Repertory Theatre 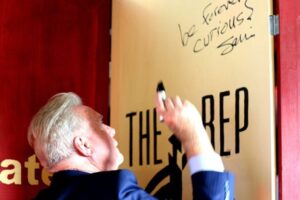 We’ve all experienced so much loss in the last 2+ years: personal, political, and pandemic-related. We’ve become inured to a new horror every day.

But on June 7, when the San Diego Repertory Theatre announced that it was suspending operations and shutting its doors, it really hit me hard.

Over the 46 years of its existence (not all of which I lived in San Diego), I figure I’ve seen about 300 of its 333 productions. (I even understudied the role of Martha in Todd Salovey’s 2001 production of “Who’s Afraid of Virginia Woolf?”).

They embraced diversity earlier and stronger than anyone else. It was written into their mission statement. It was in their DNA.

They got on the interactive/immersive theater bandwagon early, too. They even expanded their social-consciousness mandate by inviting citizens to weigh in (within the context of a new play) on local political issues and civic problems and solutions.

Artistic director Sam Woodhouse (and his co-founder, Doug Jacobs, who left the Rep in 1997) were always attuned to the community — showing a variety of faces, amplifying a range of voices. They always had a finger on the pulse of the community, to keep abreast of what was happening, and an ear to the ground, to get a sense what was coming.

Even when they established a tradition — “A Christmas Carol” every year, for many years — they re-examined it regularly, in a new light. The most memorable for me was set in a homeless encampment.

They played a major role in the renaissance of downtown San Diego, and were instrumental in enticing audiences to venture downtown for theater.

The Rep hired many, many local actors, musicians, directors and designers, and repeatedly incorporated talented high school students from the San Diego School of Creative and Performing Arts into their large-scale musicals.

I was at the San Diego Rep on that fateful night, March 13, 2020, when COVID shut down the country. It was the opening — and closing— of “House of Joy” (prescient, I think), a gorgeous production set in a 17th century Indian harem.

Now, after years of pandemic woes, the extensive re-construction of Horton Plaza has blighted them, making access difficult (though the Lyceum will still reportedly be available for rental to other groups). The flooding a few months back forced postponement of the much-anticipated production of “The Curious Incident of the Dog in the Nighttime.” That was followed by the recent cancellation of the rolling world premiere, “In Every Generation” by Ali Viterbi, the centerpiece of this year’s Jewish Arts Festival, which was never fully explained.

Of course, money figures prominently in all of this: the costs and casualties of the pandemic, the dwindling audiences all theaters are experiencing, and a funding shortfall. With the announced “restructuring” often comes a search for bankruptcy protection.

Three months ago, Sam Woodhouse, age 72, announced his retirement date in September. He has done so much for the city, the county, the arts community and the theater community. He should have gone out in a blaze of glory. Instead, he’s probably buried in paperwork and headaches.

If the Rep is to return stronger than ever, as they are suggesting, floating a possible re-start date of January 2024, they will need a formidable team of Sugar Daddies and Mamas — dedicated donors who recognize the incomparable value of this institution and don’t want to see San Diego lose a vital and valuable community treasure. I hope they step up soon.

This can only be seen a theatrical tragedy, and a tremendous loss to the entire San Diego community. Personally, I feel like I’ve lost a dear friend.