“MALA” at The Old Globe 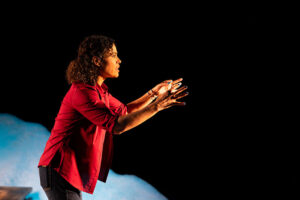 One play. Two languages. Two solo performers. In one week.

It isn’t often that a theater critic gets to see two perspectives on the same play. In two different languages.

In “Mala,” playwright/performer Melinda Lopez is telling about the death of her mother, and earlier, her father. She’s relating parent-caregiving stories from other people, and offering a bit about her family history (Cuban-American, with a tinge of Jewish).

Her play was first performed in 2016 at ArtsEmerson in Boston, and went on to other productions in the years that followed, including a month-long streaming on PBS.

Now it’s at The Old Globe – with both English and Spanish performances. From there, it will go on to become part of the Globe’s Globe for All tour, traveling around San Diego county and into Tijuana.

Like many other not-so-young people in the audience, this was a familiar story to me.

At 17, I watched my smart, athletic 50 year-old father rapidly decline and die, over the course of three months, from an aggressive brain tumor.

Fifty years later, when she was 96, my mother’s end was much slower and more protracted. Like Lopez, I held her hand at the end, as she lay in the at-home hospital-bed she so resisted, until she passed.

Sometimes, reliving these moments with someone else’s insights can be cathartic. In this case, it was unsettling and upsetting.

My mother, like Lopez’s, was difficult, and I, too, had many ambivalent moments, and many guilty ones. I, too, wondered if I was being a good enough daughter. End-of-life caregiving is not for the faint of heart.

Lopez offers moments of humor, but her title is telling. Her mother repeatedly called her “Mala,” not just ‘bad,’ but more like bad at the bone, in the soul. That kind of hurt is hard to forget.

I admire Lopez for revisiting and exploring her experiences, which so many of us have shared, or will share. But her piece provided me with few insights and little help in healing.

I didn’t understand all the Spanish (aptly spoken in a Cuban dialect, according to my bilingual companion), but both actors were very natural and authentic. Yet, I found Correa to be a far more expressive and engaging performer.

Unlike Lopez, she effectively changed her voice (and her dialect, and even her posture) for the other characters she portrayed. She used her body in a more dynamic, varied and animated way. Her rapid-fire delivery made the quieter, contemplative moments more potent.

Viewing the piece from two different positions in the arena theater offered different experiences. From one seat, I saw the actor’s face often; from the other place, not so much. And the character or play-section names, or quotes from Lopez’s iPhone diary entries, that were projected on the piled-up snow banks, were virtually unreadable from one location. Some of this must be laid at the feet of the director, David Dower.

The few amusing moments and recollections were more noteworthy in the Spanish version. But jumping back and forth in time and memory, and leaving threads of stories untied, made for a choppy narrative structure.

If you’d like to relive your caregiving trials and triumphs, or look into what’s likely to be ahead for you, see “Mala.” If you can manage it in Spanish, you might have a more rewarding experience.

COVID Protocol: Proof of vaccination and mask-wearing are no longer required, but masks are strongly recommended inside the theater.