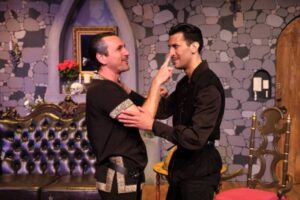 In the smart, funny Canadian sitcom, “Slings and Arrows” (2003-2006, using a phrase lifted from “Hamlet”), a seasoned Shakespearean director tries to calm a terrified young American film star who’s signed on to play the Danish Prince — a famously large and challenging role — by saying something akin to, “You just have to get through the seven soliloquies. That’s what people are coming to see. If you nail those, you’re home free.”

In Paul Rudnick’s comical 1991 stage play, “I Hate Hamlet,” set in 1989, the advice to a similarly panicked Shakespeare newbie is a lot less instructive and constructive.

John Barrymore, notorious 1920s Shakespearean, scenery-chewer and womanizer from an acclaimed theater dynasty, tells the callow/shallow TV actor, Andrew Rally, to just be like him.

Called up by a séance, and subconsciously by a Hamlet in need, the ghost of Barrymore spends six weeks, in his own Gothic former New York apartment, helping to prepare Andrew for his big stage debut.

He accomplishes much more than bringing Andrew back to his theater roots.

He also thwarts Andrew’s predatory TV director/producer and encourages him to make off with Andrew’s realtor. He reconnects with Andrew’s agent, an old flame. And he “readies” Andrew’s virginal girlfriend for her big night.

What more could any superstar do? Of course, Barrymore does acknowledge that he wound up a washed-up alcoholic has-been, but he serves his purpose when called upon.

As Andrew and Barrymore, Alex Guzman and John DeCarlo play off each other perfectly. And they duel expertly, thanks to the excellent work of Fight Choreographer Ben Cole.

Guzman is aptly TV-handsome and resistant to the lure of the stage, its lack of remuneration and its Melancholy Dane.

DeCarlo is uproariously over-the-top as the agile, narcissistic Barrymore.

Adam Daniel adds hilarity as the L.A. sharpy producer Gary. His catatonic tantrum in the second act is gut-busting.

None of this would be as funny if the script weren’t sensational. I’m a longtime fan of Paul Rudnick, having seen several of his plays and films, reading him regularly in The New Yorker, and still laughing at scenes from his riotous 1989 novel, “I’ll Take It.” He’s impressively knowledgeable, endlessly clever, and oh so New York Jewish in his humor.

The design work at SRT enriches the proceedings enormously.

All told, the production is an enormous success — hugely entertaining and repeatedly guffaw-inducing. In these dark days, who could ask for anything more? Well, there is one more thing: not only do we hear some gorgeous Shakespeare lines, well spoken, but we come to understand the magical moments that keep devoted theatermakers doing what they do.