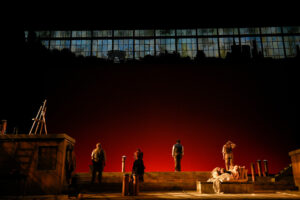 In these tenuous times, it’s tough to make plans. Everything personal, political, medical and professional is seemingly ever-changing.

But the San Diego Opera is undaunted, announcing a new season, beginning October 24, opening with a large, full-scale production of the beloved story of 1830 Paris bohemians, “La Bohème,” by Giacomo Puccini

“We were the first opera company to have to cancel an opera due to COVID-19,” says General Director David Bennett. “Aging Magician,” he says of the acclaimed opera/theater/puppetry piece, “was rehearsed in New York, and included a Brooklyn youth chorus and a string quartet. It would have been a challenge for all if everyone had to quarantine here.

“In some ways,” he says, “we were lucky. As soon as the county directive came down – no gatherings of more than 10-20 people – we could immediately disengage,” which was to everyone’s satisfaction.

Now, with all types of businesses re-opening (though not yet theaters), Bennett is optimistic. But he’s also preparing for any eventuality.

“I’m surprised that movie theaters opened so early,” he says. “But concerts and large venues are in Phase 4, and we may have some directives from the state and county.

“In the meantime, we’re looking at three possible scenarios,” he explains. “The best-case, of course, is that we go ahead with a full season. The medium situation is we wait until spring 2021. The worst case is that we produce nothing this whole fiscal year” (July-June).

Any way they look at it, there are multiple constraints. For one, the San Diego Symphony is already booked, so Bennett has to engage them as promised. But he also has to consider whether a production would be financially viable if audience capacity is restricted to 50% or less.

“I just spoke to the Met” (Metropolitan Opera in New York), Bennett reports, “and they’ve decided to do nothing until January, because 400 people in their massive space doesn’t work financially. I’ve been talking to the various unions, from musicians’ to stagehands’, about all the safety protocols.

“I’m not being Pollyanna,” he asserts. “We’re considering all possibilities, including presenting ‘Bohème’ outdoors. We’ve already put out feelers to several local venues. But that would require miking the orchestra as well as the singers, and there are other issues that arise with that scenario. Distancing the orchestra creates a very different world.

“We’re trying to be as creative as we can. But we really want to do this ‘Bohème’ with Angel Blue as Mimi (the soprano has played the ailing seamstress at the Met and at the English National Opera). Since we booked her, her career has gone through the roof. She opened the Met season this year (in “Porgy and Bess”). If we don’t get her now, we couldn’t get her for years.”

Blue was seen by San Diego audiences as Liú in SDO’s 2018 production of “Turandot.”

“The same is true for Alexander Elliott,” says Bennett of the baritone who will sing the role of the painter, Marcello. “His career is also really going places. This truly is a dream ‘Bohème.”

”But,” says Bennett, “if it comes to that, I’m really confident that we’ll find a way to do it outdoors.”

Next on the calendar is “One Amazing Night,” part of the Opera’s inventive and successful pared-down dētour Series. The Orchestra is engaged, but the singers have not yet been announced for this Nov. 18 recital (Balboa Theatre).

To usher in the holiday season (Dec. 4-6, Balboa Theatre), the Opera is bringing back the hugely popular a capella choral opera, “All is Calm: The Christmas Truce of 1914.” An annual event for the past several years from the small, charitable Bodhi Tree Concerts (which has canceled all productions this year), the piece was presented in association with the Opera in 2018. Now, on its own, the Opera is producing this moving, real-life World War I story of the incredible night when French, English and German soldiers on the Western Front called an unofficial truce and emerged from their trenches to sing, drink, trade gifts and play sports, before going right back to fighting again.

“It’s a great piece,” says Bennett. “And, like ‘Aging Magician,’ it doesn’t require the orchestra. The artists are contracted, but everyone has been given a clear sense that we understand and are working though the uncertainties of this time.”

The “biggest news” of the season, according to Bennett, is the double-bill of Puccini operas (it’s a three-Puccini season), featuring “a huge international star,” mezzo-soprano Stephanie Blythe (who last appeared here in Verdi’s “Masked Ball” and “Requiem”). The two one-act operas are part of the 1918 Verdi triptych known as “il trittico.”

Blythe will sing the princess in the tragedy “Suor Angelica” and the title role in the comedy “Gianni Schicchi,” a role written for a male baritone.

“She was scheduled to sing the villain, the Principesa, In ‘Suro Angelica,’” says Bennett, “and she said, ‘Let me sing Gianni.’ And I thought, ‘Why not? It’s an interesting idea.’ The director (Paul Curran, making his company debut) liked the idea, too. This will be noteworthy.” (Feb. 13, 16, 19, 21, Civic Theatre).

Then the Opera reinstates the postponed ‘Aging Magician,” created by composer Paola Prestini and librettist/singer/musician Rinde Eckert. This dētour offering is a family-friendly fable about time and youth, as an aging clockmaker revisits his past. (The Civic Theatre, March 26-27)

Rounding out the season is another postponed production, Gioachino Rossini’s 1813 comic opera, “The Barber of Seville.” This contemporary production was inspired by the films of Spanish director Pedro Almodóvar. The titular barber, Figaro (baritone David Pershall), is a wily fellow who knows everyone’s secrets and scandals. So he’s more than willing to help a lovesick Count rescue his beloved from the clutches of her greedy guardian. (The Civic Theatre, April 24, 27, 30, May 2).

Bennett is really excited about his slate of future productions, including a “cirque-inspired “Magic Flute,” with the Queen of the Night performing on aerial silks; a commissioned work, “The Last Dream of Frida and Diego,” which takes place during the Day of the Dead; a co-commissioned monodrama (one mezzo, four composers) called “Untitled Film Stills,” inspired by the work of photographic artist Cindy Sherman; a musical theater work, “Closer than Ever,” that focuses on the songs of Richard Maltby, Jr. and David Shire; and a chamber opera, “Ellen West,” by Ricky Ian Gordon, focused on the life of a living writer dealing with bulimia. The piece had its New York premiere this past January.

Bennett feels that the Opera is coming into the season in “remarkable shape financially.” He’s proud that the company is “much leaner” now, though that “heavy lifting” including laying off some staff, as well as decreasing the budget considerably and presenting less expensive  productions.

“The fundraising has been really good this year,” he says. “Thanks to generous bequests and estate planning, we’ll weather this storm and end with reserve funds of, maybe, $2 million. The endowment, at $7 million, is now more than twice the size it was when I got here.

“But the question always is, How long do donors stay loyal if you’re not producing as they expect you to produce? There’s also the expectation of what opera is — in general, and in this community. With the dētour Series, people came to understand that opera can be different. We’re using local singers and chorus for that, and for our outreach over the summer, trying to keep people employed. Ticket sales for the new season have already been encouraging.

“I don’t think I have my head in the sand,” Bennett continues. “I looked at six scenarios and presented three to the Board. All were approved. We’re all trying to be realistic. We may not be able to produce opera in the way we normally do for a time. But if we can hang in there in some form or fashion, I’m game for trying anything.”