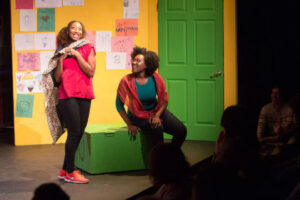 A collective is a cooperative enterprise.

The 3½-year old Blindspot Collective is a nonprofit theater group that produces what they call “radically inclusive programming at the intersection of advocacy, education, and entertainment.” Their focus is “community-engaged theater that spotlights unheard voices.”

They chose Blindspot for their name, says co-founder Catherine Hanna Schrock, “because our work seeks to capture the issues, people, groups and modes of theater that may not be in the center of our vision and on our main platforms. We seek out issues, communities and types of theater that are often in the Blindspot.”

Schrock serves as Director of Community Development. Her co-founder, Blake McCarty, is Director of Artistic Development. But their non-hierarchical organizational structure provides opportunities for everyone to contribute to the creative process. As Schrock puts it, there’s “an open-handedness and inclusion about how we lead.”

Inclusion is a major theme of a good deal of their work, which last year featured “Hall Pass,” a large-scale, interactive work that was part of the La Jolla Playhouse’s Without Walls (WOW) Festival; and a 6-month residency during which they presented short, site-specific, immersive plays at various locations around the San Diego airport.

During the school year, they go out into the community and present plays for students.

“Safa’s Story,” based on the real experiences of one of Schrock’s Zimbabwe-born students, is intended for elementary to middle schools. It was written and directed by Schrock, herself an emigré; her Egyptian family came to this country 30 years ago. The play emphasizes accepting differences and actively decreasing bullying.

Safa, a 5th grader from Zimbabwe, eats different foods and has different cultural beliefs that some other students ridicule and find hard to accept.

The potent theater piece, which has toured local schools several times, was presented for the general public earlier this month at the City Heights Performance Annex. School tours continue through March 13th.

“Safa’s Story” is presented in a style called Forum Theatre, which was established in the early 1970s by Brazilian director and activist Augusto Boal; it’s a popular form of what’s called “Theater of the Oppressed.”

In Forum Theater, the protagonist experiences a conflict or injustice, and ultimately fails to reach a desired life goal. The facilitator (for this play, Schrock), engages the audience in a conversation and invites them to change the outcome of the play.

The actors begin the play again and audience members are given the opportunity to simply say, “STOP!” when they wish to change the action in the play. Audience members are then invited to imagine a better choice that could have been made in that moment. The students (or, in the case of the public performance, the children, parents or other observers), are invited onto the stage to assume the role of a character and to roleplay an action that would create a better result for the central character.

This worked amazingly well at the performance I attended. Apparently, it always does. That’s because Schrock is a spectacular facilitator, who handles children with extreme sensitivity and respect, and engages the audience from the moment they enter the theater.

Everyone was encouraged to participate in “recess games” (hide ‘n’ seek, hula hoops, trashketball, Monkey in the Middle). Periodically during the 90-minute presentation, the audience was encouraged to engage with their neighbors, to have a brief dialogue with someone they didn’t know (what Blindspot calls “pair-shares”) about the issues or actions in the play, or their own similar experiences.

“We really want to create a space where people feel comfortable to engage,” says Schrock, “I built in a lot of different tools to facilitate connection and dialogue.”

Blindspot’s next production is “Untold,” a “verbatim play” about mental health, touring high schools for four weeks beginning April 27. There will be a public performance in May.

This structure results in a very different style of theater. It’s not interactive, but the text is derived from transcripts of actual interviews.

“Untold” weaves together music, movement and excerpts from more than 100 interviews, to explore the mental health crisis in America: the Centers for Disease Control and Prevention estimate that 46% of the population will struggle with some form of mental illness at some point in their lives.

The piece, which focuses on hope and resilience, premiered in 2017 at the San Diego International Fringe Festival, where it won the Jonathan Dunn-Rankin Award for New Work.

Students from several local high schools conducted the interviews with a wide range of San Diegans: social workers and therapists; those struggling with depression, anxiety, addiction or eating disorders; veterans battling PTSD; survivors of suicide; and the families of the suffering.

McCarty assembled and edited the interviews into an engaging piece of theater that portrays bravery, vulnerability and strength in coping with these problems and at the same time, challenging the stigma that continues to be associated with mental illness and people’s reluctance to engage in conversation about it.

All the performers in Blindspot productions are paid. Those involved in the school tours may appear in 2-3 shows a day. They’re all trained in active, compassionate listening and improvisational skills.

The mission and the result are impressive. The group’s dedication to activism, advocacy and education presented in an entertaining, often interactive fashion, is helping to change the story, one issue, play and school at a time.