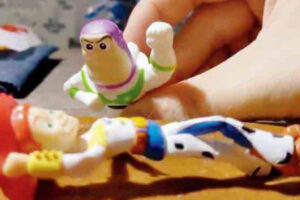 If you’ve got a minute, Julia Giolzetti has something wacky and wonderful for you to do with it: Recite a few lines from a Shakespeare play, using whatever you’ve got at hand at home — props, puppets, pets, wigs, costumes, kids, etc.

In other words, become a part of “Sofa Shakespeare.”

It all started when the coronavirus “shelter-in-place” edict came down on March 14. At that moment, Julia lost three teaching jobs and an acting gig.

Despite the fact that she shares her abode with a husband and a 2 year-old daughter (Rosalind, named for a Shakespeare heroine, of course), Giolzetti was bereft without theater.

She came up with a wild idea: she’d take a Shakespeare play (starting with “Romeo and Juliet,” her lifelong favorite), and break it into one-minute bits. She posted on Facebook, aiming for her like-minded friends, and before she knew it, she had received hundreds of responses from around the world.

Within nine days, the first free online performance (“R&J”) was released, with 183 participants from 32 states and the US Virgin Islands, as well as representatives of six different countries speaking six different languages. “Twelfth Night” followed soon after, to even greater success, and “Titus Andronicus” is about to launch.

“The entire point of this project,” Julia says, “was to create an opportunity for anyone who was game to perform Shakespeare for a global audience from the confinements of their living rooms. The joy in watching the storytellers change every minute is in seeing all of us at home: with our pets, kids, messy bedrooms, wet hair, finger puppets and T-rex costumes.

“’Sofa Shakespeare is for all humans who are alive and enjoy reading and performing Shakespeare. Some novices jumped at the challenge. Some are veteran Shakespearean actors. Some are even Tony Award winners — Joanna Gleason and Chris Sarandon are in ‘Twelfth Night’.”

“Sofa Shakespeare” is basically a one-person operation (with help on the spiffy title sequences from local actor/dad Robin Thompson). Julia serves as curator, editor, producer and maintainer. At age 34, she has performed in Shakespeare plays for the past 20 years, but she’s been obsessed with the Bard since she was 4.

“My mother showed me Franco Zeffirelli’s [1958 film] ‘Romeo and Juliet.’ I can’t believe she showed me that at 4! But she was obsessed with it, and I soon was, too. I didn’t get all of it, but I got the danger, the urgency, the violence and the love.”

By the time she was 7 or 8, her family was ready for her to move on. Her grandmother gave her a copy of “The Complete Works of William Shakespeare.”

“None of the family has any theater background,” she claims, though she does mention that her great grandfather worked at Warner Bros. in the ‘40s, as an electrician on the set with Humphrey Bogart and Lauren Bacall. He died when Julia was 7, but she inherited the photos signed by Bogart and Bacall with personal inscriptions to her great grandpa.

Julia’s first performance in a Shakespeare play was at San Diego Junior Theatre at age 12, in “A Midsummer Night’s Dream.”

“I was a fairy. No lines, but I loved it. I was obsessed with the language and the story.”

She stayed in Junior Theatre, a seminal experience in her young life, for the maximum allowable period at that time: age 8 to 18.

She went on to attend the prestigious Tisch School of the Arts at New York University and stayed in New York for a dozen years, two of which she spent performing in “Drunk Shakespeare” (yes, there is a lot of drinking onstage, she says, but more in the audience. “They vomited way more than we did!”). Doing four or five shows a week, she figures she performed 394 times with “Drunk Shakespeare.”

“I was classically trained,” Julia says. “There were so many scrappy Shakespeare companies in New York, I must’ve been in 8 or 9 different companies. Most were messing with the text, while still honoring it. But I’m super-serious about understanding the language before you mess or play with it.”

Shakespeare himself, she asserts, “never thought his words were precious. He really wrote for the common people. I don’t think he wrote for the ages; he wrote for his moment. To get that feeling, you have to update in some way. It’s all part of taking it off the pedestal.”

When she returned to San Diego in 2016, she kept acting and began teaching. At the time the pandemic set in, she was working for Playwrights Project, where she’s been since 2017, currently in a residency with 8th graders, visitng them twice weekly. She was also in her third year working with Intrepid Theatre Company, active in the Shakespeare School Tour which had just kicked off a production of “Midsummer.” Her third gig was running an after-school theater class for grades K-5 at Dingeman Elementary School in Scripps Ranch, where a production of “The Jungle Book” was in the works, planned for a March 26 opening.

In addition to all that, she was cast as the lead, Sarah, in the funny James Sherman stage play, “Beau Jest,” at the Vista Broadway Theatre. She’d only attended one rehearsal, and she’s hoping the show will be reinstated.

“It was such a crazy time,” Julia says. “I had so much stacked on top of each other, I was almost too busy. Well, coronavirus solved that problem.”

Fortunately, her husband has a (non-theater) job that continues from home. He’s in direct marketing, so “business is booming.” They’ve taken a hit financially, but they’re not seriously hurting yet.

As a Shakespeare experience, she knows that “Sofa Shakespeare” isn’t a place to start for the uninitiated. She doesn’t intend it to be “definitive, or even educational.” Each week, she’ll post a video of the full play, start to finish, but she’s also making a YouTube scene-by-scene playlist available, with contextual information about characters and action.

She encourages folks to “get creative” with their submissions, and admits that some of the results are “totally bananas,” with a Barbie doll or stuffed animal or dog ‘saying’ the lines one minute, and a professional actor the next. But she clearly feels that “something magical is happening here.”

While the participants exhibit all kinds of zany, madcap takes on the work, the lines are delivered as written. Julia does not edit the original text at all. She also doesn’t give any direction, and participants only get a 48-hour turnaround time.

“I don’t know what I was looking for,” she says. “But it’s amazing how many people have puppets and Renaissance costumes at home!”

Some people memorize the lines, some read them, some have them propped up offscreen.

“The quality is stepped up now,” she notes. “Maybe people are trying to top each other, but more of them are trying to do something fun.”

One “Twelfth Night” performing pair used carrots as the speakers, one with a tomato hat, the other with green bean hair. A murder from “Titus Andronicus” was enacted by stabbing a Quaker Oats box. Another scene from “Titus” features a live ‘talking’ duck (and a box of chickens).

“Every video is like a Christmas present,” Julia enthuses. It may not be Shakespeare for purists, but “the refreshing part is, you can’t say it’s boring. If you don’t like what you’re seeing, wait a minute; something else is coming up.

“I really didn’t think it would be family-friendly, with kids involved,” says Julia. “But there are families with 3, 4, 5 or 6 year olds speaking the verse. People always say that Shakespeare is too hard for kid. But I’ve got 20 videos with 7 year olds who seem to know what they’re saying, Clearly, kids can understand ‘Romeo and Juliet’; I did!”

The submissions are still pouring in, and there are hundreds of people waiting in the queue. Julia is putting the finishing touches on “Titus,” and has already sent out a call for the next play, “A Midsummer Night’s Dream.” She’s trying to post a play a week.

“Hopefully, this connection I’m making, this worldwide community, can keep up after all this sequestering ends. I want to keep this spirit up and do as many plays as I can.”

So far, her YouTube channel has more than 6000 views and hundreds of subscribers. Tracking the demographics, she found that the audience is primarily in the coveted 25-34 year age group (60%), with another 22% comprising 35-44 year olds. The top countries represented are the U.S., UK, Canada, Australia and India.

“India got really into it,” she says with surprise. “I got three requests for interviews, including from a drama school in Mumbai, with trained Shakespearean actors.”

A friend of hers from high school, who is currently in Berlin, submitted an improv with friends who speak different languages. In one “gorgeous” minute, there was German, French, English and Italian in the scene.

Still, she says, “I really want this to be a San Diego thing, a San Diego-based project that became global. People don’t really know we’re super into theater, and what a perfect place this is for a career in theater.”

Thus far, she’s gotten about two dozen local participants, but she’s hungry for more. All the necessary info is in the Sofa Shakespeare Google form

“But this is meant for everyone in the world who feels isolated or scared, and could use some levity right now. Shakespeare is for everyone, and so is ‘Sofa Shakespeare.’

“Whoever you are, if you love how Shakespeare speaks to the human condition, you’re welcome. And if these videos make your isolation slightly more bearable and you want to say thanks.. you can buy me a coffee!” (link on the website included).

The “SOFA SHAKESPEARE” website (www.SofaShakespeare.com) has links to all the shows and info on how to submit, as well as future play announcements.

Here’s a sneak preview of Act I, scene 1 of “Titus Andronicus,” as it appears in the scene-by-scene playlist, with plot and context. The full-play production will post on Wednesday, 4/8/20.