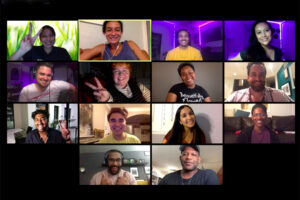 Listen up, Gen Z: This one’s for you!

The San Diego theater company, which prides itself on producing “radically inclusive programming at the intersection of advocacy, education and entertainment,” is presenting a world premiere pop-up audio performance.

Using what’s called Verbatim Theater, the group has created composite characters who quote directly from interviews with 40 local young community organizers.  The show, which focuses on the prominent social and protest movements of the last few years, features rallying cries like Black Lives Matter, No Justice, No Peace, The Revolution is Now.

An energizing rallying cry, the piece is unlike other productions.

First, it’s an interactive audio-play. The free pop-up performances encourage folks to gather outdoors, socially distanced (10 feet apart), to form a community and show solidarity with the issues raised. Interspersed with the testimonials are poems, songs, chants, opportunities to lie down, stand up, sing, dance.

There are very personal statements and compelling assertions of self-identification. But there are no live performers. Audiences are asked to “perform a protest” while listening together, communally.  They’re encouraged to raise their collective voice.

Attendees are asked to provide their own headphones and smartphones with an internet connection. They’re encouraged (not required??) to wear masks. The nine pop-up presentations will take place in locations from Chula Vista to Southeast San Diego. National City to La Jolla, culminating in a national video livestream.

I received an advance copy of the audio-play, which begins with the voice of John Lewis, proclaiming, “I got in good trouble, necessary trouble. We need to make some noise if we’re going to save America.”

Then we hear from nine diverse actors portraying a range of young activists, roughly 18 to 25 years old — male, female, black, white, Latinx, Asian, Muslim, indigenous, straight, gay, trans — who express their thoughts and concerns, and encourage others to join them in taking an active role in their world.

“When I was I high school,” says one, “I saw people being ‘othered.’ We need to claim who we are.”

Empowerment of the marginalized is a through-line, as is the hammered-home theme, “The Revolution is Now.” The catchy (if oft-repeated) original music is by Richard Allen and Taran Gray.

“It’s not about fighting for a seat at the table,” one says. “We get to make our own table, or flip the damn thing.”

Youth, they tell us, are standing up all over the planet.

“Our generation has grown up feeling like we have to fix everything: the environment, racism, gun violence. It’s a lot of pressure. But it’s also exciting.”

“We’re not backing down.” “Generation Z has a fighting spirit.”

“We’re working through our trauma and the nation’s trauma.”

“There comes a time when not standing up means you’re complicit.”

“We’re not giving a voice to the voiceless. I don’t think we’re voiceless. We’ve had a voice. We just need people to listen.”

So, this is an opportunity to listen, and get inspired — for adults as well as for other members of Gen Z.

“Take my hand,” they say to the “older generations.” “Let me lead you. Remember us, and how we’re making change.”

You will very likely remember this unique way of presenting dramatic information. The statements are often powerful and inspirational. But they do go on. There were at least five or six times I thought it was over (and it could easily have been).

But the potent ending (before the final iteration of the song, “The Revolution is Now”) was again, the voice of John Lewis. “We have a lot of work to do. We must never give up or give in. This is your moral mandate.”