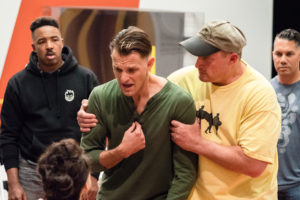 An admonition courses through “What Happens Next,” a world premiere produced by the La Jolla Playhouse, in association with L.A.’s Cornerstone Theatre:

“If you haven’t been there, you can’t understand.”

The ‘there’ is war – specifically, in this case, the recent (ongoing) wars in Iraq and Afghanistan.

Award-winning playwright Naomi Iizuka, head of the MFA Playwriting program at UC San Diego, was commissioned by the Playhouse, as part of the theater’s 9-year old site-inspired Without Walls (WoW) series that takes theater out of the traditional theater space.

She has spent years interviewing veterans and their families, and getting their stories – what they do and don’t want to talk about, what they remember or try to forget.

Working with Michael John Garcés, artistic director of the 30 year-old Cornerstone Theatre, a company that creates new plays for, with and about local communities, Iizuka not only conflated and incorporated many of the stories she heard, but she and Garcés included actual vets in the cast.

Four of the eight ensemble members are veterans – all former Marines. Another is a Blue Star Mother, whose son is a career Army officer. Several of the vets are dedicated to improving the lives of other veterans and/or their families. One works with the Challenged Athletes Foundation (CAF) in Sorrento Valley, which is where the show is being staged.

The setting is a therapeutic drama program for vets. The leader, wide-eyed, idealistic Bonnie (thoroughly credible local actor Hannah Logan), has had no prior experience with veterans. In more than one instance, what happens in her sessions overwhelms her.

In a (possibly unnecessary) side-story that may humanize and ‘veteranize’ her, Bonnie has returned to her hometown of San Diego, but has yet to visit her hospitalized father – a veteran. In one not-believable off-note in an otherwise riveting play, she repeatedly gets – and takes – phonecalls during her sessions. This seems highly unprofessional and highly unlikely.

But everything else about this intense and powerful drama (with some comic moments) rings very true.

And while we who haven’t served truly cannot understand, we sure get a harrowing sense of the horrors of being at war – and returning home.

Per their program bios, one of the veteran cast members has been diagnosed with PTSD. Another had his leg amputated below the knee after he stepped on an I.E.D. (Improvised Explosive Device) in Afghanistan.

In the play, performed in a bare, high-ceilinged room, Bonnie tries to engage them in classic “theater games,” like introducing themselves with an alliterative self-description (“Terrific Tina,” “Magic Mike,” etc.); tossing an imaginary ball; setting up a visual scene by becoming inanimate objects of their choice (a tree, a road, a cloud, juxtaposed).

There is a great deal of resistance at first, and considerable reluctance to open up. Anger erupts repeatedly. Verbal arguments escalate to the precipice of physical brawls.

Bonnie confides to Margaret, the motherly cookie-bringer (real-life Blue Star Mom Jennie McFarling) that she feels out of her depth, inadequate and unable to help these vets in any way.

“Just be there,” Margaret tells her. “Listen. That’s all you can do.”

The only other woman in the mix – and her role is a crucial one — is defiant, recalcitrant trauma nurse, Tina (excellently embodied by Judy Bauerlein, program director of Theatre at CSU San Marcos).

Each of the men, marvelously played by vets Nick Borrelli, Nico Marcolongo, Francisco Martínezcuello, Kionte Story, and Cornerstone artistic associate Bruce A. Lemon, Jr., alternately displays rage, refusal, hostility, affability, shut-down, openness, honesty and support for the others. Some are actually telling parts of their own stories, that they had related to Iizuka.

There are insights galore here, and haunting, stirring authenticity. With the high level of performance throughout, it’s hard to tell the pros from the vets.

The audience of about 75 sits in folding chairs surrounding the open playing space — leaving four aisles, for the furious performer walkouts.

This is one play everyone owes it to themselves to see. We need to try to understand what we do when we send our young people overseas to fight in wars without end. Or wars in general. Though many re-up for repeat tours of duty, they are all scarred for life.

This show is a gut-punch of reality that shouldn’t be missed.