“AMERICAN MARIACHI” at The Old Globe 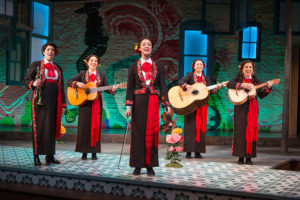 Mariachi is all about “familia, amor and tradición.”

And so is “American Mariachi,” a world premiere by José Cruz González, presented by The Old Globe in association with the Denver Center for the Performing Arts Theatre Company, where it opened first, in February.

Family and love are at the core of the story, but tradition — and breaking it — are also crucial.

The musical folk genre, mariachi, traces back to at least the late 18th century in central Mexico. The bands were originally composed of only male musicians; the songs and skills were passed down from father to son.

In the early-to-mid 20th century, women began to establish their own mariachi sound. The women’s groups (typically with a male manager) traveled  throughout North and South America.

Then their voices were silenced.

In the 1960s and ‘70s, with the advent of feminism and the burgeoning of the equal rights movement, women, especially in the U.S., were emboldened,  and began to spread their musical/vocal wings.

That is the (unspoken) backdrop to this play-with-lots-of-music.

Set in the 1970s, in a close-knit Latino community somewhere in the Southwest, “American Mariachi” focuses on Lucha (engaging Jennifer Paredes), the primary caregiver for her ailing mother, Amalia (beautifully dignified Doreen Montalvo), who is losing contact due to downward-spiraling dementia. In her youth, Amalia wanted to be a violin player, but marriage and family stalled her plans.

When Lucha realizes that she can elicit memories and emotional responses from her mother through music, she and her hard-edged best friend and cousin, Boli (terrific, hilarious Heather Velazquez), hatch a plan to start an all-female mariachi band.

Minor complication: they  have no instruments, they don’t know how to play, and there’s no group. And if Lucha’s stern and distant father, Federico (Bobby Plascencia, who shows an impressive range of emotions) found out, he’d raise hell. You don’t mess with tradición!

But Lucha and Boli are fiercely determined, and they manage to come up with three other (somewhat reluctant) volunteers: the oversexed hair stylist Soyla (Crissy Guerrero, funny in her strength and seductiveness), ultra-shy, ultra-religious Gabby (Natalie Camunas, sweet and submissive) and independent-minded Isabel (forceful Amanda Robles), who is crushed under the thumb of her controlling husband (Luis Quintero, who plays other roles amusingly).

Lucha seeks help from her uncle Mino (excellent Rodney Lizcano), an instrument maker and player, who used to be Federico’s best friend, until a falling out severed their relationship. He finds instruments for the young women, encourages them to learn to play by ear, and gives them a place to practice, effectively becoming their manager, and snagging them their first gig, at a quinceañera party.

[Interesting side-note: The female actors actually did not know how to play the instruments assigned to them. They had a mere four weeks to learn during rehearsals].

Since this is a comedy, all the problems are resolved at the end, with a touch of surrealism as facilitator. It’s all about life and death (the story becomes poignant and heart-rending at times), hubris and forgiveness, miscommunication and reconciliation. And memory.

At the outset, though, the tone seems off.  Paredes (who was recently named Female Actor of the Year by the San Diego Theatre Critics Circle) was overacting, the text was rife with clichés, and the exposition was clunky.

The various characters, each clearly etched, verged on, if not stereotypes, at least Types (the rowdy girl, the good girl, the sexpot, the macho husband , the controlling father, etc.). But there were exceptions, too, like kindly, helpful Mino, whose character provided a welcome balance.

In any event, the performances were so strong, we accepted these characters for who they were meant to represent: everyday folks going about their everyday lives, appreciating family, loving in their idiosyncratic ways, and relishing the music that defines their culture.

Once Lucha and Boli get their plan going, the story moves from telenovela to touching family drama and story of female empowerment.

We learn fascinating information about mariachi (Saint Cecilia is the patron saint of the artform), and the important role of each instrument in the band. The big- bellied guitarron, Mino tells us, is “the heartbeat, the trumpet accents brightly and el violin brings it all together.”

Like the characters, the play readily shifts between English and Spanish. Some of the better jokes, it seemed, were not translated. But everything a monolingual needed to know was crystal clear.

The set (Regina Garcia) provided a lovely reflection of the community:  colorful graffiti and portraits on the walls of apartments, in shades of bright turquoise and pink. The costumes (Meghan Anderson Doyle), lighting (Paul Miller) and sound (Ken Travis) enhance the experience.

This new work needs some tweaking, especially the first 30 minutes. But ultimately, what we come away with, after moments of laughter and even tears, is a warm feeling of familia and a greater appreciation of Mexican American pride, culture, music – and powerful, resilient Chicanas.