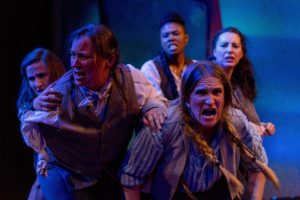 If Lin can do it, anyone can, right? Muck with history, that is.

In “Hamilton,” Lin Manuel Miranda updated and deracinated the Founding Fathers, giving them a range of ethnicities and a hip vernacular.

New York-based playwright Jaclyn Backhaus takes the conceit one step further (sans rap). She changes the gender as well as the race and colloquialism. Even her title is ironic: “Men in Boats” is written for women only.

He and his nine men in four 20-foot boats weren’t the first to ply the Green and Colorado Rivers (many Indians and white men had come before). But their three-month, 700-mile journey was the first thorough scientific survey of the region undertaken with the support of the U.S. government.

Seven of the ten explorers were veterans of the Civil War (all fought on the Union side), where Powell had lost an arm. All had wilderness know-how, but none had any prior whitewater experience.

Ten men began the journey, but only six completed it. One wealthy Englishman, Goodman (Tiffany Tang) came along just for “sport”; he couldn’t take the rigor and departed early. The other three were part of a mutiny. They left the group just two days before the rest reached their intended destination, having survived the death-defying trip from Wyoming to Nevada, through the Grand Canyon. The three disgruntled/fearful men were never heard from again.

Backhaus takes this tale of derring-do, often using florid, poetic descriptions from Powell’s published journals, and turns the whole thing on its head. Having women play these rough-and-tumble, swaggering examples of machismo and Manifest Destiny is her way of challenging the patriarchy and, as she has put it, giving this “idea of male conquest to someone who usually doesn’t have the right to that role. It begs the question,” she added, “of what histories we are lacking. The skewed perspective of entertainment – male, white — should be changed.”

And so, change it she has.

The ten formidable women onstage at New Village Arts, dressed in rugged Western gear, are having the adventure of their lives, displaying all the bluster and bravado they rarely get to display.

There are no boats or oars. There’s no river, except for projections and a terrific soundscape (Melanie Chen Cole, at her absolute best). Movable, foldable painted pillars (scenic design by Christopher Scott Murillo) represent the sheer cliffs that tower over the canyon.

Through vivid imagination, presentational style and synchronized movement, director Melissa Coleman-Reed invites us to experience it all.

Only some of it works. The production starts out at a feverish pitch. The bombast and male grandstanding is so over-the-top, and the yelling so relentless, it’s headache-inducing.

But when things settle down a bit, and individual characters begin to emerge, we become more engaged. By the end, we feel spent, as though we, too, had made the torturous journey, riddled with treacherous rapids, hazardous waterfalls, rocks and eddies and killer snakes, not to mention cigarette theft, and the loss of boats, food rations and navigational instruments.

It should be an uninterrupted excursion. In the New York and Chicago productions, the play lasted a fast-paced 90-100 minutes. It breaks the mood, energy and tempo to have an intermission – and a drawn-out 2 hour 15 minute run-time.

The trip is not all danger and distress, though there’s plenty of that, some of it rather harrowing. There are comic moments, and two hilariously hip Ute Indians (Tamara McMillian and Melba Novoa, doubling up on roles as participants in the mutiny), who offer food and deadpan awe (“Wow.” “So chill”).

In this regional premiere, each actor has a moment to shine, but the performances tend to focus on one note or personality trait.

Two standouts, who present more nuanced, multi-dimensional characters, are Milena (Sellers) Phillips as Powell’s older brother, Old Shady, an enigmatic figure with a fierce gaze and a love of nature and song. And Nancy Ross as the aggressive, scrappy hunter and trapper, Dunn, who challenges Powell’s opinions and authority, and thinks he should not only be the leader, but he should be long remembered. (Alas, he led the mutiny and was lost to history).  The fate of the rest of the crew (including Brianna Dodson as 19 year-old George Y. Bradley and Paloma Dominguez as professional guide John C. Sumner), is intimated at the end of the play. Only Powell went on to acclaim.

As that one-armed leader, Kristianne Kurner, NVA artistic director, maintains ballast, remaining steady and optimistic throughout, working hard to keep the peace and inspire the men to soldier on. As the resourceful cook, Hawkins, Samantha Ginn starts out a bit frenetic, but settles in and has some very funny moments. She and Hall (Joy Yvonne Jones, as mule driver/oarsman Andrew Hall) dub their vessel the “Party Boat” (which inspired the name of the special themed drink in the lobby).

The stylized moves are intriguing, but the screaming boat scenes (“Rocks!” “Waterfall!” “Hug the wall!”) tend to become repetitive.

The narrative hews close to history, but it takes obvious joy in sending up macho males and their seemingly inherent need to traverse and dominate.  Some of the same territory and female perspective  were covered in an earlier play (2013), “The Explorers Club,” a comedy by Nell Benjamin, set in the same time period , that ran at Lamb’s Players Theatre last year, where the inane, hyperbolic ‘good old boys’ were outraged that a female wanted to join their ranks.

Perhaps most amusing in “Men on Boats” is seeing that manly bluster and bravado in the hands and mouths of women (chest-bumps and all), which makes that kind of posturing and attitude look preposterous.

It’s high time for women to grab the reins (or oars) – in rivers, theaters and beyond.