“SOUL DOCTOR: JOURNEY OF A ROCK STAR RABBI” at the Lyceum Theatre 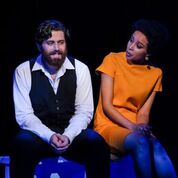 The free-form, anarchic abandon of “Hair” and “Rent,” mixed with the father/son generational angst of “The Jazz Singer” and the pain, joy and religious ardor of “Fiddler on the Roof.”

“Soul Doctor: Journey of a Rock Star Rabbi,” may be reminiscent of other musicals, but it tells a story all its own.

And, as unlikely as it may seem, the tale is true. Mostly.

Shlomo Carlebach was born in Berlin (not Vienna, as the show has it), into a rabbinical dynasty going back ten generations. When Hitler and his henchmen began to crush the Jewish population, the family fled to Vienna, then Switzerland, finally ending up in New York.

All this is truncated in the show, which still feels overstuffed. The first act in particular starts out slow and lasts too long.

It begins in 1967, with a delightfully nostalgic, hippie-ish psychedelic sensibility, as the benevolent, bearded and beatific Rabbi Carlebach (Josh Young) welcomes us to his House of Love and Prayer (a real communal interfaith gathering-place on the corner of Haight and Ashbury, in San Francisco).

It’s not the only time Shlomo’s peace-&-love followers, called his “Holy Beggars,” venture into the audience to interact; ultimately, they invite us up onstage to dance with them.

From that affable beginning, we get flashbacks of young Shlomo (talented, New York-based former San Diegan Dylan Hoffinger), a brilliant Talmudic student who chafes under his father’s traditional and dogmatic teachings. When his father (solid, stolid Martin Payner) shows up later and sees Shlomo with his ragtag devotees, he calls the gathering a “gypsy carnival” and dubs his son “a rabbi who’s lost his way.”

But Shlomo retorts that he “found a different way.”

He did, indeed, writing and adapting liturgical music to bluesy, jazzy rhythms. He went on to become the foremost religious Jewish songwriter of the 20th century, writing thousands of songs (many still heard in synagogues today) and recording 25 albums. One of his most famous songs, that opens and closes the show, is the lively “Am Yisrael Chai” (‘The Nation of Israel Lives’).

His career took a sharp turn when he found his way to Greenwich Village, where he met Pete Seeger, Bob Dylan and others. It was at that time (though not actually in that venue) that he met the Queen of Soul, Nina Simone (incandescent Ester Rada, a bona fide superstar in Israel).

And that’s when the musical really takes off. Too much exposition and “telling” before then. When this seminal relationship kicks in, the energy kicks up several notches. It’s ironic that Shlomo at first adhered to the Orthodox Jewish prohibition against touching women, but he came to abandon that interdiction. After his sudden death in 1994 (at age 69), it was revealed that a number of women had complained about his being a little too familiar and inappropriate. This posthumous #MeToo moment doesn’t make its way into the musical.

How the lives and careers of Shlomo and Nina intersect becomes the most compelling part of the musical. The play, like the historical record, remains vague about the true nature and depth of their relationship.

But there are touching, moving, joyful or horrifying moments (the latter features a chilling Nazi encounter in Vienna) throughout the show. The warm-hearted spirit would remain uninterrupted if the running time were a tight, intermissionless 90 minutes instead of a rambling 2½ hours.

The 17-member ensemble is nothing short of amazing – many of them quadruple threats: actors/singers/dancers/musicians. Particular standouts are violinist Ginna Doyle, dancer Megan Ort and Luke Wygodny as Moshele, the mystical musician who encourages Shlomo to follow his bliss.

In its first incarnation, the show received mixed reviews on and Off Broadway. This revised version, with lyrics by David Schechter and librettist Daniel S. Wise, offers some touching ballads, but the most jubilant numbers are pure Carlebach. The show is scheduled for a run in Israel, followed by one in Los Angeles.

At its center, Josh Young, who was last here in 2011, in a stupendous turn as Judas in “Jesus Christ Superstar” at the La Jolla Playhouse, is terrific as Shlomo – warm, smart, loving, inclusive and inspiring.

There’s a lot to like here; we just need a little less of it. Still, the show leaves us energized and uplifted —  and we could use a dose of the Soul Doctor’s peace, love and acceptance now, more than ever.