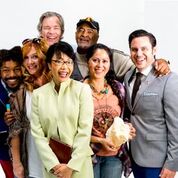 Fact: Some people just do not like interactive theater

Fact: Whether you do or not, you aren’t obligated (or called upon) to participate

Fact: There is no such place as Beachtown, though it’s loosely based on Imperial Beach, a highly diverse waterfront community

The world premiere interactive, immersive play, “Beachtown” is based on the play “Beertown,” a prototype created by dog + pony dc, a theater company that specializes in this sort of theatrical immersion. Dog + pony artistic director, Rachel Grossman, made her piece generic, a kind of Anytown, USA, which has facilitated its use around the country. This is the tenth incarnation of the concept; ours is a good deal more tailored and specifically personalized to represent San Diego.

“Beachtown” is the baby of writer/actor/director Herbert Siguenza, a co-founder of the 30 year-old Chicano comedy trio, Culture Clash. On opening night, he had just been notified that his  Andrew W. Mellon Foundation‘s National Playwright Residency, which allows him to be playwright-in-residence at the San Diego Repertory Theatre, will be renewed for another three years – which gives us four more years of his prolific talent and creativity.

The setup for his current enterprise, created with Rachel Grossman, is the 100th anniversary of the Beachtown Time Capsule. In the lobby, before the play begins, we read about the history of the town (with some wonderful details, many of them factually representing San Diego), partake of some excellent desserts, and meet the townsfolk (AKA Beachtonians), played by a talented group of local actors, under the direction of Sam Woodhouse.

Every ten years, there’s a Beachtonian town council meeting, to open up the time capsule and remove one artifact, replacing it with something that better represents the present moment; or, as the Mayor likes to say, “who we are today.”

There are seven ephemeral (changeable) artifacts in the wooden chest (functional, though it doesn’t look like a capsule of any kind); the group decides which one will be replaced this year. The audience has to weigh in on that decision, and then, weigh in again to determine – and justify – which of three proffered items should go in instead, and why.

For each performance, the three items and their attendant issues will vary, though what this adds to any given performance is unclear. Every performance will be different by definition, because every audience is different.

All this discussion engenders some very interesting interaction. The audience on opening night was more than willing to participate – actively, passionately and sometimes humorously.

But there are just too many items to discuss and it all takes too long. The town hymn and singalongs (re-worked, with rather lame lyrics, to familiar melodies) should be the first to go, along with the Guest Community Artist. Although it’s a noble idea to add entertainment to the proceedings, it’s unnecessary and unrealistic, and it increases the already-long running time. The night I was there, the performance was by PGK Dance. Attractive and appealing, but not related to the task at hand.

In aiming for verisimilitude, Siguenza has overloaded the basic script, which is augmented with a good deal of improvisatory dialogue. It’s also stuffed with all manner of superfluous activities, including the Invocation, Pledge of Allegiance, Oath of Civic Responsibility and Ephemeral Artifact Farewell, none of which adds much to the main objective.

Now that the piece is on its feet, it’s time to trim the fat. The intent should be to get it down to a fleet, 90-minute one-act.  Nearly 2½ hours is just too long to sustain the conceit.

That said, despite some silliness in the script, the interactions were lively and inventive. Some participants really got into the activity, claiming to have been at the last meeting 10 years ago, or having visited some of the fictitious hangouts named.

One more thing: There has to be a better way to calculate the votes (one-by-one raised-hand counts take a really long time). It’s fun to elect an Ombudsperson from the audience (two offered their services; one was voted in), to verify the tallies and selections.

Most important to the power of the piece, is that the artifacts actually represented many real issues of deep concern to San Diegans: immigration, gender equality, gay rights, treatment of veterans and the homeless crisis. This format truly offers a platform for folks to express their opinions, and to challenge the intentionally partisan viewpoints of the ‘townspeople.’

The actors are delightful ensemble, quick on their feet, and able to provide historical information and supportive evidence for their artifact selection or personal perspective. (By report, they were each given 85 pages of preparatory dramaturgical notes). A lot of the item and issue selection was based on Siguenza’s many interviews with San Diegans, and the historical realities of the region.

Does it all work? Yes and no. The simulation of the democratic process is highly effective, and elicited some interesting discussion. As a city, a county and a country, we need civil discourse now more than ever.

We all know that real town council meetings can go on for hours, but accuracy and veracity should only go so far in a theatrical creation. The objective here is certainly commendable. Many in the San Diego community are anxious to play their part. But to make the effort really work, brevity should be respected as much as authenticity.