“THE HAPPIEST PLACE ON EARTH” at Diversionary Theatre 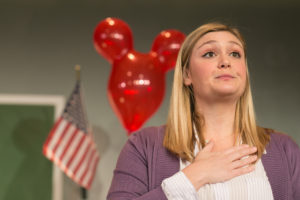 The title of Philip Dawkins’ play, “The Happiest Place on Earth,” gives a false impression. But then, so does Disneyland, which features prominently.

The 90-minute solo piece is basically a depressive’s disquisition on the illusion of happiness – as it plays out in three generations of the playwright’s family, which takes refuge in The Magic Kingdom. One particular Christmas trip stands out.

There’s an old adage about writing that says, the more particular and specific the narrative, the more universal it becomes.

But despite the exhaustive detail about the family and the design, rides and intentions of Walt Disney’s 1955 creation, there’s little for the audience to hang onto here, and no character to care about, including the storyteller, the youngest male of the mostly female clan.

Dawkins performed the piece himself in its Chicago premiere two years ago. Now, at Diversionary Theatre, with the same director, Jonathan L. Green, the choice was inexplicably made to cast a woman in the role – the talented and engaging local, Jacque Wilke. She tells us she’ll be playing Philip for the evening, but not exactly why.

The stage is designed to look like a classroom, with a beat-up wood desk, a large chalkboard, and a pull-down screen for laminate overheads, mostly actual Dawkins family photos.

So, who are we supposed to be? The evening starts out like a lecture about Walt Disney and his real and imagined world, and turns into an intimate reminiscence, about the brutal reality of death and the family’s escape to the fantasy of Disneyland.

The most compelling characters are Philip’s grandmother and her husband, who dies suddenly and too young. But it’s hard to keep their four daughters straight, and Wilke doesn’t differentiate them sufficiently.

The points about Disneyland’s escapism and the futility of a lifelong pursuit of happiness are made early and often.

Why do we need to know all this about Disneyland? Why don’t we learn anything about the playwright? This is his highly personal sharing of supposedly meaningful family stories that leave us feeling a little left out.