“A JEWISH JOKE” at The Roustabouts 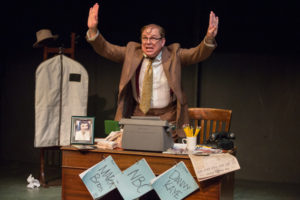 VENUE: The Roustabouts at Moxie Theatre

This is a perfect time for “A Jewish Joke.”

Not just that we could all use a laugh these days (and there are plenty of Borscht Belt joke classics in Marni Freedman and Phil Johnson’s play).

But this is a crucial time to think about standing up for your principles and doing what’s right. Silence or cowardice equal complicity.

“A Jewish Joke” is set in 1950, in the midst of the McCarthy Red Scare era and the heinous hearings of the House on Un-American Activities (HUAC). Names were being named and lives and careers were being destroyed. The witch-hunts were particularly potent in Hollywood.

Bernie Lutz (a delightful fictional character) is a comedy writer who’s worked his way up the hard way, from telling dirty jokes in a burlesque house to being under contract to write movies for the likes of Danny Kaye and the Marx Brothers.

He’s getting his big break tonight – on the day we meet him. It’s his breakthrough movie premiere, written with his lifelong partner, Morris Frumsky. But Morris seems to be Missing in Action.

As Bernie becomes increasingly frantic and frenetic, fielding phonecalls and interviews, getting his tux ready, the day escalates into disaster.

It seems that Bernie and Morris have had their names listed in Red Channels, The Report of Communist Influence in the entertainment industry.

Bernie denies everything – about himself and Morris — though there was that one meeting Morris dragged him to (Bernie just went for the cocktail franks).

“I’m a writer,” he insists. “I don’t do politics.” But he also admits to being a “pretzel,” twisting himself any which way for the job and the money.

Bernie tries to pull strings – with his colleagues at MGM, right up to Louis B. Mayer – and even with a “friendly” FBI agent.

As more information comes in, he’s asked to testify against his partner, so his own name can be cleared.

And so, this guy who has a joke for every occasion (he pulls from his huge pile of jocular setups and punchlines, particularly when things get tough or challenging), is forced into a crisis of conscience.

Will he ultimately be a mensch (a person of integrity), or not? His mother always told him (in her “endearing shriek,” ‘When there is no mensch, be the mensch.’ Can he live up to that exhortation?

It was good enough to snag him the Best Drama award at the United Solofest in New York. And next January, “A Jewish Joke” will have its official Off Broadway debut at the Lion Theatre.

It has been exciting to watch the work and the performance evolve. But as with all new or in-progress work, once one issue/problem is resolved, another seems to pop up. The extraneous elements now are the (unseen) cat in Bernie’s office, and having Bernie’s activist father implicated in the son’s Big Decision; this weakens the moment and the dilemma, which should only concern him, his partner and his soul.

All the ‘dialogue’ is one-sided, spoken to the audience directly, or into the phone with unobserved interlocutors. When the FBI agent makes a remark about “you people” to Bernie, it’s a definitive turning point for him, as he realizes that all this isn’t just about smoking out Communists; it’s also patently anti-Semitic. Bernie even reminds us that six of the infamous blacklisted Hollywood Ten were Jewish. Clearly, it wasn’t just Red-baiting.

With its mix of goofball humor and deadly serious subjects, the play could be difficult to navigate. But David Ellenstein’s direction is beautifully nuanced. As the frenzy and intensity build to a crashing crescendo, he wisely inserts pauses and quiet moments, most effectively with Bernie’s sweet reminiscence of the night he fell in love with his wife. We are swept along on this perilous journey and we come out the better for it.

The setting is the wonderfully busy, cluttered office (design uncredited) of a brown-suited neurotic (costume by Jordyn Smiley), with ‘50s era music providing background along with radio broadcasts from McCarthy and the HUAC hearings.

In a year when hate-crimes, and anti-Semitic acts in particular, have increased by more than 80%, there’s a heightened urgency to this piece. Seeing the play now, and contemplating the commonalities with today (as hate-mongering white supremacists have been encouraged to openly stalk the land) becomes imperative.

“A Jewish Joke,” which has already toured Festivals around the country, should be seen by every American. We need a reminder of what moral, righteous, principled men look like.

This is vibrant, vital, must-see theater.