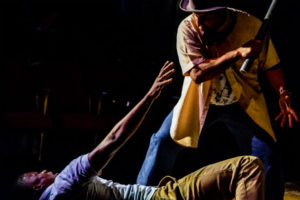 The ceremony at the Jacobs Center for Neighborhood Innovation on February 12 drew nearly 500 people, many of whom wore black clothes and/or white roses in solidarity with the #MeToo movement.

The actors of the year, recognized for multiple, wide-ranging performances during 2017, were Jennifer Paredes and Cortez L. Johnson.

Outstanding Dramatic Production
“The Ballad of Emmett Till” — ion theatre

Outstanding Direction of a Play

Outstanding Direction of a Musical
James Vasquez — “In the Heights,” Moonlight Stage Productions

Outstanding Ensemble
“The Ballad of Emmett Till” — ion theatre

Founded in 1983 and re-established in 2002, the San Diego Theatre Critics Circle is an independent, nonprofit organization of print and online theater critics dedicated to open and honest dialogue about theater in San Diego County and to honoring artistic excellence