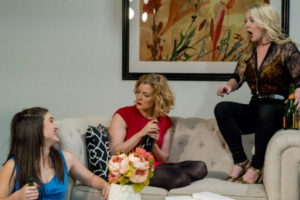 Bachelor parties are often an invitation to Bad Behavior and an encouragement for excess.

So, expect the worst in Leslye Headland’s “Bachelorette,” ‘cause boy, does it deliver those goods (or bads, in this case).

This 2008 blackest of comedies is the third installment of Headland’s Seven Deadly Sins cycle. The subject is Gluttony – and every imaginable overindulgence is on display: from sex to drugs (champagne, cocaine, pot and pills galore) to self-destruction; brutal fat-shaming and endless cat-fighting. Sounds like a barrel of fun, right? Well, it is surprisingly funny, but it also goes deep and dark.

Of four former high school friends in their late 20s, plus-sized Becky (Samantha Vesco) is the first to get married – and to a rich, handsome hunk, to boot.

For some unfathomable reason, Becky has asked Regan (Rin Ehlers Sheldon) to be her Maid of Honor, and to feel free to use her room at the swanky New York hotel where the wedding is to take place tomorrow, since she’ll be spending the night with her fiancé.

Regan, resentful that she wasn’t the first to wed, spitefully asks Katie (Kay Marian McNellen) and Gena (Lauren King) to party with her – even though Becky explicitly refused to invite them to the event, due to negative experiences in the past. Those two already-high hotties bring along a couple of guys they just met.

It’s a recipe for disaster all around – and awful things will occur: from a ripped $15 thousand dress to a trashed room, to vomit and nosebleeds, to impulsive (compulsive?) sex to cavalierly (but cruelly) divulged confidences, from attempted suicide to shattered friendships. Regan, describing her relationship to Becky, says, “We were close; we threw up every meal together.”

This is a disquieting display of young adults who refuse to grow up.

A few juicy, representative quotes: “I don’t think pot is addictive; I just started and never stopped”; “I love blacking out… The best is when I’m so drunk I can’t lift the bottle to my mouth any more”; “I’m 29. The only change in the last 12 years is that I’m a little bit taller.”

All five of these eternal adolescents (not including Becky, who only makes an appearance near the end of the fast-paced 80-minute play) are stunted, drifting and deeply disappointed in how their lives have failed to live up to their vaunted expectations.

Self-loathing abounds (“Twelve years old is when you start hating yourself,” says Regan nonchalantly). The insecurities are diminished somewhat by copious amounts of mind-numbing substances, or heavy doses of self-deception and avoidance, or turning the nastiness on others.

Katie (Kay Marian McNellen, who made a big splash last year in Backyard’s “Tarrytown” and OnStage’s “Heathers the Musical”) is the former prom queen who still lives with her parents and is miserable in a retail job. She just wants to be noticed, not (as she constantly feels) ignored. Or worse (as when she was prom queen), hated.

Gena (Lauren King) wants to be needed and useful. She appears to be the only one of these Mean Girls with any sort of moral compass; at the end, as the disasters pile up, she asserts herself as the Voice of Reason.

Regan is the ringleader who sets in motion the night of dissipation and destruction. She’s sharp and steely, apparently the most accomplished (with a degree from Princeton and a doctor boyfriend who treats her poorly). She’s haughty and invincible at first; clearly, she can be vicious and condescending. But Jeff (Alex Guzman), brings her down a peg or two, and by the end of this night of debauchery, she’s left groveling in pitiful desperation.

Jeff is a smart and smarmy ‘player.’ But Joe (Graham Ehlers Sheldon, husband of Rin – quite the power couple!) is a nice guy, mired in addiction but craving real connection.

And then there’s Becky, the Bride, the butt of endless debasement (“Fat girls are so easy to hate,” Katie cheerfully claims). But she gets the last laugh – and the Great Guy who treats her like a queen.

This play could serve double-sin duty; it’s a paean to Envy as well as Gluttony. But behind the pitch-black laugh-lines and over-the-top antics, there’s a bitter sadness and overwhelming sense of despair.

Playwright Headland (who also wrote the screen adaptation of her play, which was penned ten years ago, when she was 27), has a sharp eye for detail and ear for dialogue. But she does not paint a pretty picture of her wanton, hedonistic, hookup generation.

In its sixth production in three years, Backyard Renaissance has bitten into this ruthless creation with ferocity.

We all know incarnations of these people, and the havoc they can create – for themselves and others. Maybe you already left them behind. If not, you know that they make toxic friends.

The Diversionary Black Box Theatre, where Backyard Renaissance has made its home, has never looked so beautiful (kudos to scenic designer Justin Humphres). The stunning, white-on-white set (be sure to wipe your feet before entering) is the most attractive and elaborate ever seen in this space. The costumes (by executive director Jessica John Gercke) are racy and appealing. The lighting (Alex Crocker Lakness) and sound (Melanie Chen Cole) provide apt support.

And when it’s all done, is there Dramatic Catharsis? Not so much. Gratefulness to be far from your own 20s? For sure.