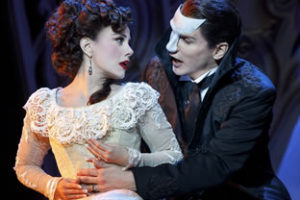 The mask remains, but The Phantom himself has re-located – to Coney Island (what a comedown from the Paris Opera House!)

Coney Island, btw, is not an island – and, unlike the script for the new sequel to the 1986 blockbuster, “The Phantom of the Opera,” you don’t say you’re ON Coney Island, you’re IN it. It’s just a neighborhood. In Brooklyn.

It’s 1907, 10 years since the Phantom disappeared from Paris, leaving his protégée, the brilliant singer Christine Daaé, in the lurch.

We never learn exactly why he chose Coney Island, of all places. But it’s intimated that he’ll fit right in with the weird and wild denizens of the massive amusement area.  He’s established his own midway circus/freak show/vaudeville house, Mr. Y’s Phantasm. Parading before us are stilt-walkers, a guy in a bear suit, a fat woman, etc. And an adult female dwarf who is lifted and thrown around like a baby-doll, in a cringe-inducing way.

It feels reminiscent of the 1997 musical “Side Show,” with its daring opening  number, “Come Look at the Freaks.” It also looks strangely similar to the current film, “The Greatest Showman,” though of course, that came long after this “Phantom” sequel was created.

The show, with music by Andrew Lloyd Webber and lyrics by Glenn Slater, has had a very rocky history. The storyline initially emerged when Lloyd Webber partnered with author Frederick Forsyth, but the collaboration fell apart, and Forsyth went on to write a novel using some of the ideas. “The Phantom of Manhattan” was published in 1999 and is listed as source material for the current musical.

The original version of the show opened in London in 2010 (directed by our own Jack O’Brien, beloved former artistic director of The Old Globe). With problems from the get-go, it was quickly shuttered and revised, and a new director (Bill Kenwright) was brought in. The reviews were rather negative, though the 2011 Australian production was somewhat better received.

This new national touring production is “an extensive re-working” of that incarnation, with book by Ben Elton and additional lyrics by Charles Hart.

One curious element: the original “Phantom” was set in 1881, and this one takes place in 1907; by my calculations, that isn’t a 10 year difference. Poetic – or is that mathematical — license?

As we learn at the outset, The Phantom has been pining for his lost love, Christine, for lo, these many (however many) years. He starts out with the power ballad, “’Til I Hear You Sing” (one of the show’s two oft-repeated earworms; the other is the title tune). A feverish beginning like that doesn’t leave much room for an emotional arc.

In the intervening years, Christine has become an international singing sensation. Though the press material suggests that you don’t have to have seen “The Phantom of the Opera” to enjoy the sequel, it sure helps – knowing his relationship to Christine and her singing, and to the Vicomte, Raoul. That knowledge would help the story make more sense, while providing necessary background.

Christine is now married to Raoul, and they have a son. When The Phantom reads in the newspaper that Christine has been invited to New York by Oscar Hammerstein to inaugurate his new opera  house, he sets a snare to lure Christine back to him.

Christine’s imminent arrival does not sit well with the stern Madame Giry (formidable and strong-voiced Karen Mason) who, along with her daughter, young ingénue Meg (adorable, multi-talented Mary Michael Patterson), has followed the Phantom from Paris and remained loyal. Meg is about to get her big break as the leading lady in an act that looks like a sleazier version of Miss Adelaide and her Hot Box Girls from “Guys and Dolls.” Christine may usurp her position.

Raoul, who has gambled away Christine’s fortune, is also none too happy about his wife’s reuniting with the creepy, controlling, disfigured figure from her past.

As one can expect, things do not go too well for anyone. Tragedy ensues, which makes it unlikely that there will be yet another sequel. Just as well, but you never know.

Like the original “Phantom” (True Confession: I’m not a major fan), the production overpowers the story. The set is outrageously elaborate, with multiple moving parts, including a turntable, an oversized carousel, metal stanchions of varying levels and heights. Looming over the proscenium arch is about a quarter of the famous half-mask. With so much missing, it took awhile to decode it; at first, it looked like a giant dinosaur bone.

The costumes (designed, along with the set, by Gabriela Tylesova) are wildly colorful for the circus performers, severe for the Madame, flashy for the Phantom (that red-trimmed cape he endlessly swirls!), beautiful and elegant for Christine. The lighting (Nick Schlieper) ranges from garish to beautiful. The sound (Mick Potter) is mostly crisp, except the Phantom’s words are often muffled by the mask.

Like this show’s forerunner, there is a surfeit of schmaltz, melodrama and smoke effects, as well as a bevy of unresolved plot points and absurd coincidences.

The music is, as expected, lush, operatic, waltzy, earnest  and overblown. The excellent orchestrations are by David Cullen and Sir Lloyd Webber). Under the baton and music direction of Dale Rieling, the 17-piece orchestra sounds much larger, and soars with those inevitable crashing crescendos. The most consistently excellent and satisfying part of the evening is the singing.

Both leads – Icelandic tenor Gardar Thor Cortes (making his American debut) and coloratura soprano Meghan Picerno — have award-winning opera chops. He has a marvelous, mellow vocal quality, but a surprisingly ungainly physical presence. He stands with his arms extended, and lurches like Frankenstein’s monster.

Picerno looks stunning in her gowns, and effortlessly and effectively reaches the highest of notes (as The Phantom always demanded of Christine in their first encounters).

Michael Gillis was standing in for Raoul the night I was there, and he did a highly convincing job conveying and singing the role of this dissolute wastrel who can be cruel to his wife and dismissive of his son, young Gustave (a very impressive Casey Lyons at the performance I attended; he’s a young man with an already hefty list of musical theater credits).

The bottom line? Fans of “Phantom” and Andrew Lloyd Webber will be thrilled with this overwrought production, plot-holes and unnecessary additions notwithstanding (the circus characters, for example,  add little but color, and distract from the story).

“Love Never Dies” is certainly a spectacle and extravaganza, but the mawkish plot would work better with a lot less froufrou and folderol.