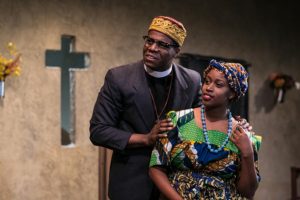 When a play begins with a hymn, and is set in a church, there are certain expectations. Considerations of sin, transgression, immorality, perhaps.

All those appear in “Cardboard Piano,” as do brutality, murder and war. But playwright Hansol Jung subverts expectations.

Horrible acts are committed, and then re-committed. But there’s no real remorse, redemption or salvation. Homophobia turns to abject hypocrisy. And the ugly cycle continues.

It all starts out so sweet and amorous. On the eve of the Millennium, in a remote Ugandan village, two very young women have found forbidden love. Chris is the white daughter of American missionaries; Adiel is an idealistic village girl. They’re giddy about their private, clandestine wedding, and they tape record their marriage vows, as Chris reveals her plans for them to escape.

But in a war-torn, narrow-minded nation, their bliss won’t last long. First, an escaped soldier, bleeding from his head, blunders in, seeking sanctuary. The women try to minister to his wounds. Then, a fiercer guerilla rebel comes looking for the 13 year-old escapee. Things take a shockingly violent turn.

In the second act, more than a decade later, Chris returns to bury her father’s ashes. She meets the native pastor and his wife. Ironically, he’s been practicing a sermon about the Good Samaritan, just as he’s about to banish a young gay man from his congregation. The pastor’s offenses go far deeper than that. Recognitions and revelations mount up.

In often poetic language, the play asks how far the justifiability of forgiveness extends.

At Diversionary Theatre, a strong and committed cast, under the direction of Jacole Kitchen, brings the story to throbbing life. Though the first act gets off to a sluggish start, Act 2 contains the darkest drama, and the riveting Wrekless Watson, as Pastor Paul, takes the most ravaging emotional journey.

The design is simple and effective, but the questions posed are complex: Can the past be erased, or fixed like a torn-up toy piano?