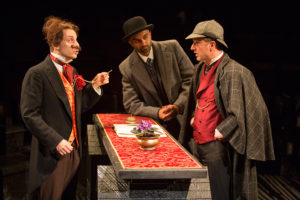 Sherlock Holmes may never have lived – but he somehow lives on forever.

It’s endlessly fascinating – in any artform – to re-encounter the detective’s uncanny intelligence, skillful reasoning and methodical thinking. Never mind that he was an opium addict and an inveterate pipe-smoker. We love him for his brain, in spite of — or maybe because of — his flaws and peccadilloes.

One of his most notorious cases, written by Sir Arthur Conan Doyle in 1902, focused on that terrifying, killer beast of the Devonshire moors: “The Hound of the Baskervilles.”

In 2015, playwright Ken Ludwig thought he’d make hay, and make light of it all, while of course, maintaining the mystery.

What he created is a 2-hour comedy with about 40 eccentric characters, mostly inhabited by three overworked actors. It’s the quick-changing costumes, the hastily drawn-on moustache, the gender-shifting roles and the dozens of accents, from all over the British Isles, with German, Scandinavian and Texan thrown in – that make “Baskerville” such a hoot.

Ludwig borrows liberally from movies, including “Young Frankenstein,” the Mel Brooks mashup. So we get a gnarled, hunchbacked, creepy male and female Igor, and a “Walk this way” moment, among many memorable others.

Staging the play requires enormous sleight-of-hand. And Scripps Ranch Theatre has the right man for the job: director Charles Peters is actually a professional magician.

He’s also an ace at making theater magic, putting his five cast members through their rapid-fire, hair-trigger-timed paces. The result is no mystery… it’s downright riotous at times.

Robin Thompson and Michael Lundy make a delightful duo as Holmes and Watson. And everyone else is pretty hilariously portrayed by Bob Himlin, and the sidesplitting Russell Clements and Michelle Marie Trester.

The case, which unfolds with the usual twists, turns and red herrings, keeps us guessing, aided by the effective lighting, sound and fog machine.

The era of the late 1800s is fittingly conveyed by the Steampunk set Peters conceived, with its overlapping and interlocking gears. Perfect, since everything onstage runs like clockwork.