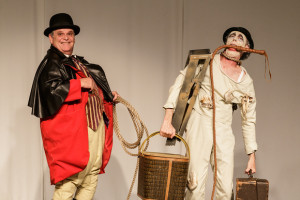 It may be a definitive classic, but it’s also a gargantuan challenge. Samuel Beckett’s 1953 masterwork, “Waiting for Godot,” is an absurdist tragicomedy. Achieving the right balance is crucial.

Voted by 800 British theatermakers as the most significant English language play of the 20th century, the piece is all about dichotomy and antithesis. It’s about artifice and realism, birth and death, anguish and hope, seriousness and humor.

Many productions have presented its static inaction with vaudevillian brio. Comics such as Bert Lahr, Robin Williams and Steve Martin have played the two central tramps as clowns. Beckett himself once suggested pairing Buster Keaton and Marlon Brando.

The fruitlessmoon theatreworks production, directed and produced by Aimee Greenberg, hasn’t figured out its tone. It’s not quite funny enough or tragic enough – though, especially in the first act, it’s excessively loud for the small White Box space it’s in.

The subtext and subtle contradictions could be accentuated: Gogo’s aching feet vs. Didi’s leaky bladder; the reversal of dependence between the master and slave, Pozzo and Lucky, from the first act to the second.

The physical comedy between Tom Steward and Joe Powers, the inseparable duo eternally waiting for the enigmatic Godot, isn’t sufficiently precise. Fred Harlow and Don Loper are more effective as the bombastic, imperious Pozzo and the overburdened, hapless Lucky. Here portrayed as a sad-faced clown, Lucky has one torrent of hyperverbal output, which is presented by Loper with agility to match his rubber-limbed moves. Jordi Bertran is spot-on as the vacant-eyed boy who shows up twice to announce the no-show of Godot and the promise of his appearance tomorrow. There’s always hope within the hopelessness.

This play, with its stark setting removed in space and time, is a haunting contemplation of the condition of Man, the interminable waiting and talking we engage in to fill the inevitable silence. We may spend time with others, but ultimately, we’re each alone.

Beckett’s level of bleak uncertainty and pitch-black comedy perhaps demands too much from some audience members – and some productions.