“THE JACKSONIAN” at ion theatre 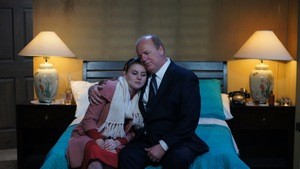 Remember the wacky, sadistic dentist in “Little Shop of Horrors?” The one who beat up on poor, gullible Audrey and laughed himself silly on nitrous oxide?

Dr. Perch says he’s known as “the painless dentist.” But don’t believe a word of it. In fact, you can’t really buy anything anyone says in this 90-minute tumble from comedy to carnage.

The moss hangs low and the music is eerie and ominous in this grisly but fine ion theatre production. “The swamp is swallowing us up,” says Perch’s 16 year-old daughter, Rosy, who, despite her name and her dark clairvoyance, doesn’t see things from a Rosy Perch at all. Like the other characters in this eccentric melodrama, she has a bleak view of people and life.

Racism, sexism, religious hypocrisy, murder and the KKK lurk within and just outside the decaying Jacksonian Motel in Jackson, Mississippi, where Dr. Perch has holed up as he and his wife try to work things out. Or not. As that relationship is dissolving, the motel bartender and his flirtatious, bigoted main squeeze discuss marriage (she’s obsessed with it; he wants no part of it, and invents a terminal heart constriction to put her off). She’s even lied for him under oath to give him an alibi for the night of the murder of a local black gas station worker. It’s the 1960s, and integration is on most everyone’s mind.

Meanwhile, as her mother seeks a reconciliation – and a divorce – Rosy cultivates a mean case of acne, for the good of humanity, she says, as she discharges lyrical, enigmatic prognostications.

All these folks are flat-out whack-jobs, and while their craziness is funny at the outset, things start to turn abusive, inebriated and violent in grimly imaginative and unsavory ways.

Under the co-direction of ion co-founders Claudio Raygoza and Glenn Paris, the ensemble is pitch-perfect, all seriously committed to their schizo characters. They may just tickle your warped funnybone, haunt your worst nightmares — or keep you miles away from anyone in the dental profession.