“NOW YOU SEE IT” at North Coast Repertory Theatre 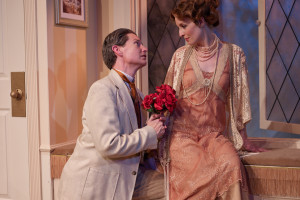 French farceur Georges Feydeau has been dead for nearly a century. But an English translation of one of his works is now making its American premiere, in a major coup for North Coast Repertory Theatre.

This isn’t the first translation of the 1892 comedy, but British playwright Kenneth McLeish made some essential alterations to the original in the 1990s, conflating characters, shifting the focus and shortening the whole affair.

“Now You See It” doesn’t really feel like a farce — too many of the crucial characteristics are missing  — but it certainly has some wacky scenes. And the requisite scheming servant – in this case, a magician, who teaches a hypocritical husband some of the tricks of his trade. So the gentleman regularly puts his wife under a hypnotic spell, freeing him to philander.

The play gets off to a slow start, as we endure Victor Summersby’s repeated misogynistic disquisitions about women’s simplicity, childishness and lack of reason. It grows tiresome, but then things ramp up and the second act achieves a certain level of hilarity, due in large part to the presence of two nearly foolproof funnymen: David McBean as a bumbling, foppish adorer of Victor’s wife; and Ruff Yeager, as the cuckolded husband of Victor’s mistress. Those two alone are worth the price of admission.

Kern McFadden and Allison Minick are perfect as the central couple – he insufferable, and she, gracefully feminine, until her worst suspicions are confirmed, and she becomes deliciously scheming and vengeful. The only questionable character is the magic- and mischief-making servant, Oriole, constantly inebriated and not all that amusing.

Director Bruce Turk, a consummate actor in his own right, provides fast-paced and imaginative stage business, and he’s got a terrific design team for support. The set and costumes are elegant and beautifully lit.

This may not be Feydeau’s most farcical or funniest work, but you’ll definitely get a laugh – and maybe even a few guffaws – out of the onstage shenanigans. And the curtain calls are a hoot.