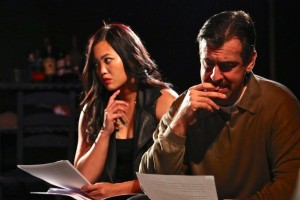 Fiction writers are pigs, whores and feral cats, we’re told. Inhuman, pretentious and narcissistic. But the braggadocio invariably masks colossal insecurity. All they want is a little feedback and encouragement. So, four young, struggling New York up-and-comers have been hand-picked to shell out $5000 each for a 10-week writing workshop, a master class with a so-called genius. Turns out, he’s a bitter, sadistic, demeaning tyrant. In the most cruel, unsparing fashion, he denigrates the work and its creators.

Welcome to the insular, literate, venomous world of Theresa Rebeck’s “Seminar,” a brutally funny look at literary aspirations and the hoops artists have to jump through to even begin to make a mark. The bedroom, in this case, is definitely not off limits. But even if they do get their foot in a door, these writers may still wind up as cynical, jaded seminar leaders like Leonard.

Fresh from its San Diego Critics Circle win of the Don Braunagel Award for Outstanding Work by a Small Theater Company, InnerMission Productions scores again, in this third excellent staging of its first full season.

In the tiny black box at Diversionary Theatre, inventively adorned with word-splashed floor and furniture, the audience of 30 surrounds the playing space, so it’s like we’re part of this literary ferocity, too.

Kym Pappas directs with a firm hand but a light touch, and her five skillful actors carve out nicely nuanced characters. Jonathan Sachs is terrific as the monstrous Leonard, nonchalantly terrorizing his four charges, wonderfully played by strong and sarcastic Samantha Ginn, hypersexed Dana Wing Lau, arrogant Robert Malave and contemptuous Alex Guzman. The only false note is the ending, which takes an unexpected and unearned 180 turn, obliterating all the conflict and outrage with a tidy, shiny bow.

But Rebeck has something important to say here: The novel may be dead, books in decline, publishing in chaos and encouraging mentors in short supply – but thank heavens, artists keep at it, tenaciously trying to make sense of the world – and even change it.