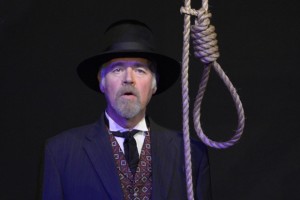 Call it a midlife crisis. Or a moral quandary. But William Maledon, “The Prince of Hangmen,” is having doubts.

It’s 1895, and after 90 hangings, he’s ready to hang it up, and put the past behind him. But his narcissistic, manipulative wife, Millie, is in no way ready to give up the spotlight her husband’s career affords her. Some people claim fame any way they can get it.

“Rope,” a musical written, composed and produced by La Jollan Mark Sickman, was inspired by real events. There actually was a Prince of Hangmen, one George Maledon, who did his business in Arkansas. Craving an Old West sensibility, Sickman changed his name slightly and set his tale in Arizona, where 108 deaths on the scaffold took place before a national moratorium was imposed by the U.S. Supreme Court in 1972.

Sickman has created a colorful cast of characters, at the center of which is Maledon, with his uncertainties about his waning physical/professional prowess, the metaphorical blood on his hands, and the guilt of his next victim, who professes innocence and is awaiting an appeal.

Maledon is the most fully fleshed-out character, by far. We know where he came from and where he wants to go. We even know about Henry Carpenter (effective, affecting M. Keala Milles, Jr.), the convicted murderer.

But we’re told very little about Millie and what makes her crave attention so badly that she has no concern whatsoever for the life or death of her husband’s victims (or “collaborators,” as he calls them), as long as she gets a prominent place at the well-attended hangings, and can show off her fancy clothes. She’s a person we need to get under the skin of, so we don’t just see her as the “bitch” she describes herself as.

The actors portraying the Maledons have Broadway credits, and they’re the highlights of this production at the Tenth Avenue Theatre & Arts Center downtown.

Dennis Holland created the role of Maledon and he fits it like the smooth gloves the hangman wears to make his job appear dignified and civilized. Holland is warm and grounded, with a sonorous speaking and singing voice. Natalie Nucci (a recent nominee for a 2015 San Diego Theatre Critics Circle Award for her Outstanding Featured Performance in a Musical, as Anita in San Diego Musical Theatre’s “West Side Story”), brings her beautiful voice and forceful presence to Millie.

Director/choreographer Debra Whitfield helmed the 2013 premiere at the Venus/Adonis Festival in Queens, New York. Her cast seems tentative with the rather basic moves,but they acquit themselves fairly well in acting and singing (Paul Morgavo, though he’s projecting to a much larger house, squeezes character out of what might be three one-dimensional caricatures).

The entire effort doesn’t feel polished or professional, though the singing and harmonies are strong (musical direction from Josh Weinstein, who makes a ‘band’ out of the backstage contributions from the cast (guitar to glockenspiel), providing fine and energetic accompaniment. The sound design (Jason Chody) is particularly strong.

The costumes (Janet Pitcher and Beth Connelly) are period-appropriate (especially lovely for Millie), and the set (Larry Taylor) is simple and suggestive, with a notable scaffold, imaginatively designed to do double duty as a house window and a jail cell.

Sickman’s music is pleasant, ranging from hymn to heartfelt ballad, but not all the songs advance character or plot. Sometimes, they just re-state what’s been said in the text. His lyrics are serviceable, if not incisive or clever. “Hangman’s Reverie,” “Massachusetts Avenue” and “Killer’s Alibi” are most effective in expressing the characters’ history and/or desires.

As any theater person will tell you, musicals take a long, long time to develop and find their footing. Sickman has a fascinating story to tell, and he would do well to keep tweaking and refining his work, and upping the professionalism of his production.