“R. BUCKMINSTER FULLER: THE HISTORY (AND MYSTERY) OF THE UNIVERSE 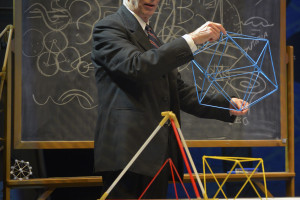 One of the major precepts of the scientist-philosopher-inventor-cosmologist Buckminster Fuller was “Less is more.” If only that principle had been applied to the updated production of D.W. Jacobs’ “R. Buckminster Fuller: The History (and Mystery) of the Universe.”

Jacobs, who conceived, created and directed the show, was the co-founder, with Sam Woodhouse, of the San Diego Repertory Theatre in 1976. He left in 1997, and it seemed most appropriate to bring him back for the theater’s 40th anniversary season.

When this play premiered in 2000, it was exciting and riveting. I praised the design team’s “grace and simplicity” and the “understated” tour de force performance. The exact opposite is true now. Sixteen years later, after the show has been seen around the country, Jacobs says he hasn’t tampered with the script. But it feels so different: saggy, baggy and logorrheic  – and even, at times, soporific.

The dense physics Bucky espouses seems straightforward enough (among many other things, Fuller popularized the geodesic dome), but the metaphysics strains credulity. And although Fuller’s writing (the source of most of the text) concerned still-timely and topical subjects such as sustainability, water conservation and desalination, the overreaching power of Wall Street, the script also features a go-nowhere screed about the CIA and a totally cockamamie idea that everyone should leave a job they don’t like and instead spend their time thinking – and only doing what they want. This, he says, will provide for a happy, functional world. Really? But who’s gonna take on, with relish, all those menial jobs no one wants – like sewage management and sanitation? Bucky’s Spaceship Earth may be an elegant image, but it doesn’t quite hold up – except to say we’re all in this together, and we’d better sail this ship more effectively. That’s a call to arms we can all buy into.

Sixteen years ago, I remember thinking Fuller was a genius and a visionary. This time, I couldn’t help seeing him as somewhat sad and a little delusional – and clearly on the autism spectrum. Aside from his stylized, repetitive hand and finger movements, his inadequate social skills were on display when he abruptly left the stage to go to the bathroom, thereby ending the first act.

(For the record, this should be a one-act, 90-minute show. It was 2 hours last time; it’s nearly 2½ now. Information this dense can’t sustain the average theatergoer. A number of folks left at intermission).

And, for someone who professes to do what he did for his children, taking a two-year silent hiatus from the world (during which his beloved wife had to speak for him), is not exactly the act of a social, family man.

The moments when he talks about his family (his youth, his courtship, the death of his first child, his consideration of suicide), are the most potent in the piece, and Campbell gives them heart.

But the real problem here is the production. The double –arced set (David Lee Cuthbert) is simple and suggestive. But the sound design (Luis Perez Ixoneztli) is relentless, intrusive and often annoying, and the projections (Jim Findlay) are a distraction from, not an enhancement of the material.

In the time since he first appeared in this piece, the gifted Campbell spent several years as a clown for Cirque du Soleil. It seems as though both he and Jacobs want to be sure we know that.

Campbell’s skillful mime skills are on extremely prominent display, coupled with a bit of mugging and clowning, all of which don’t quite suit the character. Before, the ‘mystery’ and magic were in Bucky’s words, and his unforgettable knotting of the rope he used as a demonstration of patterns in complex systems. This time, we had to imagine that experiment, though for me, that moment was a cornerstone of his work, his presentation style, and the play.

It’s hard to believe that a dramatic work (really, a lecture) could be simultaneously too dense and too silly (audience participation and singalong included), but there it is. After the long haul of it, I felt intellectually battered. Too much information to process and a lot of it not of great interest or comprehensibility, at least to me. And then, on top of that, the visual and auditory assault.

Clearly, Bucky was enthralled – even awed –  by his own ideas. But the profusion of them, the expanse and scientific intricacy of them, all in one sitting, is just too much. Fewer points would have greater impact. And as the man is portrayed here, his insistence on pushing so many notions on us at once (his actual lectures often went on for hours) seems to be one more piece of evidence of his faulty ‘theory of mind’ (ability to understand the desires, beliefs and intentions of other people).

So, maybe this play really does capture the essence of Bucky. But his persona and his sometimes impenetrable or improbable ideas, simply aren’t for everyone.